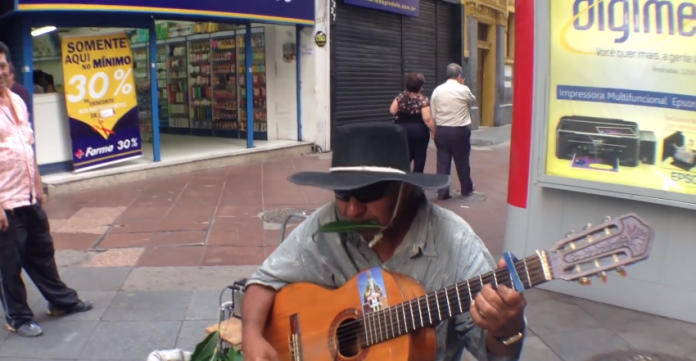 José Costa also known as ‘Zé da Folha’ is a well-known street artist from Porto Alegre who uses a guitar for rhythm, a tambourine for percussion which he plays with his foot and a João Bolão sheet (leaf) which he blows between his lips to create a tune. As seen in the video below, he would play for people in the center of the capital, in particular Rua da Praia and Bric da Redenção on Sundays.

This is an incredible talent and very unique, have you ever seen anyone play a tune on a leaf? He creates a very interesting act. Showcasing his brilliant personality throughout his performances Ze is an artist who would definitely bring excitement to anyone’s day as they walked past.

It is a regular thing in Brazil for people to use leaves like this (João Bolão sheet) in different ways. Although, we have not come across another street artist doing anything similar. The creativity showed here seems to be unique and extremely entertaining.

Zé da Folha was invited to participate in an MTV program. The show was called “Tangos e Tragedies” and was recorded at the São Pedro theater. Ze was very friendly, attentive and in a nutshell, he once said that he already worked as a bricklayer assistant, shoeshine boy and newspaper seller, but his destiny was really to play the guitar and sheet (leaf) that he had been self-teaching since he was only 10 years old! He started learning so that he could make a living.

Our sources tell us that Zé da Folha never married or had any children. He lived alone devoting himself entirely to music, which he listened to on a battery-powered radio. Zé hasn’t been seen in the city streets for a while.

If anyone knows what he is up to these days, or where/if he is performing please let us know in the comments.