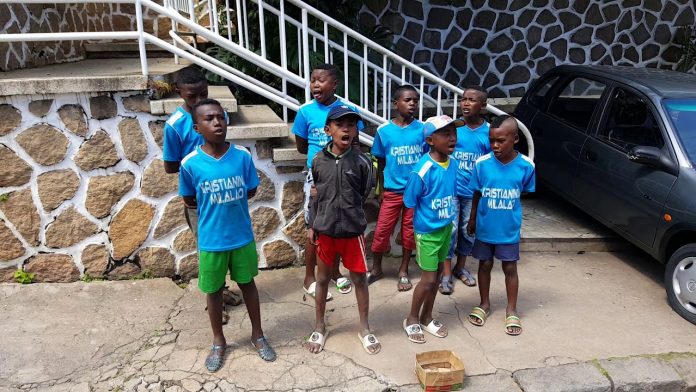 Zaza Kanto have also been known as the “Underground Boys of Tana”. Tana stands for “Antananarivo” which is the capital city of Madagascar.

The boys names are Rija, Tojo, Taheri, Thierry, Aitra, Jimmy, Njato and Rivo. They are among the poorest young men in the city, yet their talents are being admired by millions after multiple videos of their brilliant street performances were posted online.

Aged between 11 to 16, their harmonies are inspirational to listen too. They regularly perform outside a hostel in Antananarivo entertaining passers by with their music. The boys all go to school together and the majority of them are members of the same extended family.

With music running through their blood, these boys are gaining support from their local community. Virginia Summers and her husband John Miller, who works at the US embassy in Madagascar, are avid supporters of the boys music saying they admire it because “It’s honest”.

Since their videos exploded online, they have performed at a US Embassy-sponsored event which was set up to promote cultural exchange through musical performances. They also performed at a Malaria conference sponsored by USAID (United States Agency for International Development).

Most notably though, the boys were sponsored by the President of Madagascar as they went to Egypt to sing for the Malagasy soccer team. The national team advanced to the quarter-finals in the African Cup Of Nations before being knocked out by Tunisia.

Taking the money back to their families which they earn singing on the streets, these boys are aspiring super star musicians with their hearts set on a recording contract.

With the passion, determination and talent they possess there is no reason why they can’t reach the stars. If you want to see more from this inspirational band of young singers subscribe to their YouTube channel or follow their Facebook page to see more videos from them.

You can also donate to their cause via their website by clicking here.