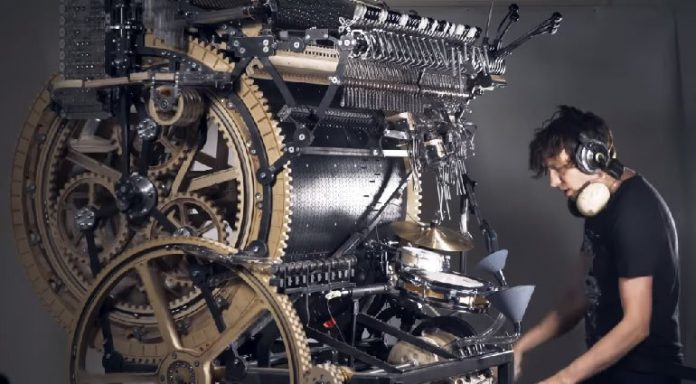 Wintergatan is without any shadow of a doubt an unbelievably talented Swedish Folk band. Their Marble Machine invention which is made out of wood is both incredible and ingenious.

The marble music machine is quite a creative and visually interesting musical concept! It was hoped that it would take around two months to build but in reality, took in 14 fourteen. Not at all surprising considering the complexity in it’s design and implementation. The video below shows the first marble machine. Wintergatan is now building a second-generation marble machine, which you can see in the videos further down in this post.

Martin Molin (band member) is seen in several Youtube videos documenting the build of what is basically a large handmade music box employing the very clever movement of marbles in order to produce a beautiful sound. It is cranked by hand which forces over two thousand marbles upwards suspended into various channels. The marbles are then released by carefully constructed gates designed to release marbles in keeping with musical timing. As they fall downwards the marbles land on various instruments below.

The marbles land on instruments such as a kick drum, bass guitar, a cymbal, high hats, snare drum, and vibraphone (a musical instrument in the struck idiophone subfamily of the percussion family). As they hit these instruments they produce sounds that are picked up by cleverly positions microphones. After the stunning success of the first marble machine, Martin is now making a more complex metal version of the instrument. The video below shows the proof of concept for the second marble machine (mark 2)!

These wheels use what are known as ‘Lego Technic beams’ with stud connectors which trigger armatures which in turn lets the marbles out. The music they produced is simply wonderful. The final video of the first marble machine showed it in full flight. As the end approaches the machine slows down as Martin stops cranking it and the marbles fall all over the floor and the music gradually slows down, fades, and then it comes to a complete stop. The video of the final machine (mark 1) was sensationally received and went viral with over 36 million views on YouTube! This is an incredible number of people and a great achievement. It just shows that there are so many people out there with discernible tastes that really appreciate this intuitive machine and those who designed it.

Version 2 of the marble music machine continues to be developed, in the video below you can see the “heartbeat” of the machine when Wintergatan added a marble conveyor belt to the second-generation machine.

Martin Molin says their band intends to use it when finished in their live performances when on tour after he has finally got it to the standard he wants. Something to really look forward to. The Music Man will be keeping a watch on what these talented guys come up with next!