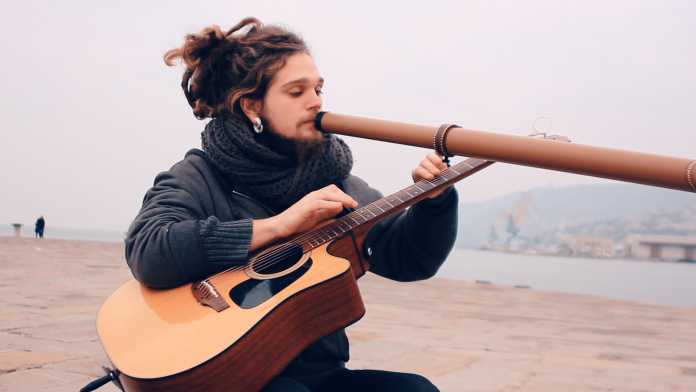 There are few people as talented and eclectic as this musician. This is Waagal from Bordeaux, France. He is a one-man band and multi-instrumentalist with extreme levels of talent.

Waagal’s off-stage name is Erwann Texier-Harth who creates music by combining the fingerstyle guitar, the didgeridoo, the hand pan, and loop pedal. He has been performing across Europe for many years and has also performed stage and street shows in France, Germany, Italy, England and Croatia. He is an awesome live performer as you can see in the video below.

He has been described as taking listeners to another universe with his unique and slightly psychedelic style of music. He cleverly combines rock, ambient, percussive guitar, ethnic music and uses a loop pedal to create a wonderfully bizarre experience for his audience.

Waagal is also known to use improvised and contemporary dance in his videos to compliment his music, creating an enlightening experience. In the video below he teams up with another awesome guitarist called Shashank and the results are incredible.

His most recent album ‘Cluster’ consists of 10 brilliantly crafted songs and he is known to collaborate with other talented musicians such as Shashank and Mezerg (who are also featured on The Music Man page).

This is definitely one of the more unusual musical styles we’ve seen here at The Music Man but we are very excited to see more.

If you want to see more of this talented artist you can find him on Facebook or on his YouTube Channel.