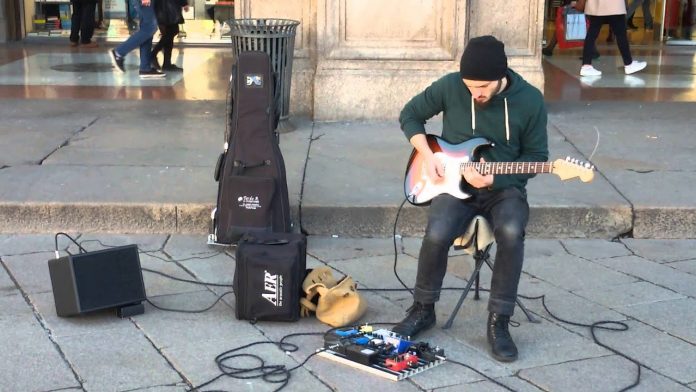 Valerio Papa is an Italian guitarist from Bracciano Rome. He played in a band called “The Grit” and moved to Milano in 2012 to perform with the band professionally.

The self-taught guitarist first picked up a guitar at the age of 5. He started learning to play using an acoustic guitar before moving onto the electric guitar at age 12. Valerio is from a family of musicians so inspiration and advice were never in short supply for the youngster.

His feel for the guitar is akin to the rock stars of the 70s. Which is why it’s so entertaining to watch him playing powerful well-known riffs with such perfection, passion and accuracy.

After recording a debut EP called “Fill The Void”, The Grit disbanded. After the split, Valerio started working as a pizza guy whilst busking part-time to satisfy his musical passion. Many members of the public have watched Valerio performing on the streets of Milano and filmed him. Videos have been uploaded of Valerio playing classics such as Pink Floyd’s “Another Brick in The Wall” alongside videos which Valerio has uploaded himself. These videos have captured music fans across the world and are helping him grow a following for his work.

Valerio has since left his pizza job to start working at a recording studio where he has teamed up with Itialian rapper “Axos”. The guitarist and rapper began work on a new project which was released in July 2018 under the heading “Axos – Iron Maiden (Prod. 40)”.

Like many buskers, Valerio has grown fond of playing on the streets. Buskers are often reported saying that their street performances create a connection with their audience which is “more real” or “direct” than any stage show could be.

Valerio travels around Europe playing to millions of passers-by with his guitar, pedalboard, and amp. Loving the freedom his talent for music has given him to travel and experience things he otherwise wouldn’t be able to do. If you’re in Italy, and you hear a classic rock guitar riff being played in the distance, maybe you will be lucky enough to bump into Valerio and listen to him playing his wonderful music.