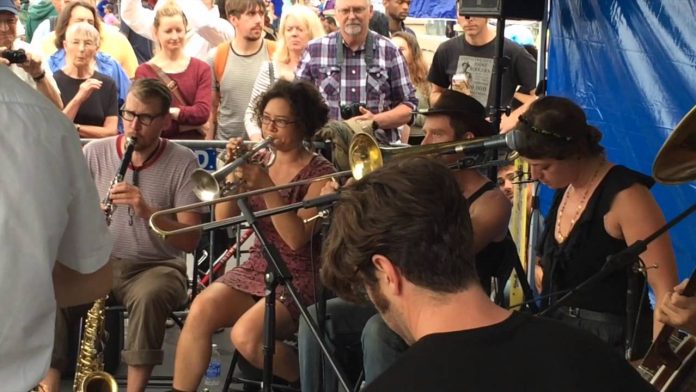 New Orleans certainly has some great talent and the multi talented ‘Tuba Skinny’ band is certainly no exception. Fantastic Jazz music with the added wonderful voice of Erica Lewis, seen often playing for free on the streets of the French Quarter of New Orleans, USA! Really great to watch!

‘Tuba Skinny’ are a traditional New Orleans Jazz band formed in 2009 in Louisiana, USA. They include many instruments all played with great skill and absolutely superb musicianship. The instruments played are Clarinet, Cornet, Trombone, Tenor Banjo, Tuba, Washboard, Guitar and along with fantastic vocals the band ensures an enjoyable time is had by those lucky enough to be watching! They are inspired by the early nineteen twenties and thirties jazz and blues music.

Although they formed in 2009, the group have steadily evolved from a collection of individual street performers into a tightly knit team of highly skilled musicians. They are passionate about not only entertaining Jazz enthusiasts on the streets of New Orleans but taking their wonderful music to many corners of the World.

Their musical influences are in fact quite diverse. Includes: Spiritual to Depression-era blues to Ragtime to Traditional Jazz. Their excellent sound shows the embedded musical history of their home town, New Orleans! They really get their audiences going with their dynamic and distinctive live performances. So much so they have very loyal supporters throughout the World.