The song was made famous by The Mamas and the Papas who were the backing singers on the original release. They decided to release their own version as a single in 1965. Below is a live version of the band performing California Dreaming in 1998.

The song is listed as 89th in the greatest songs of all time by the Rolling Stone’s top 500. The catchy melody and intricate harmonies hit the ears of millions around the world.

The song lyrics are a narrative of wanting to be in the warmth of Los Angeles during a cold winter in New York City. The Gold Record certified song was inducted into the Grammy Hall of Fame in 2001. 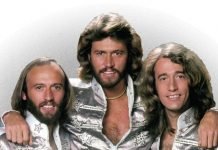