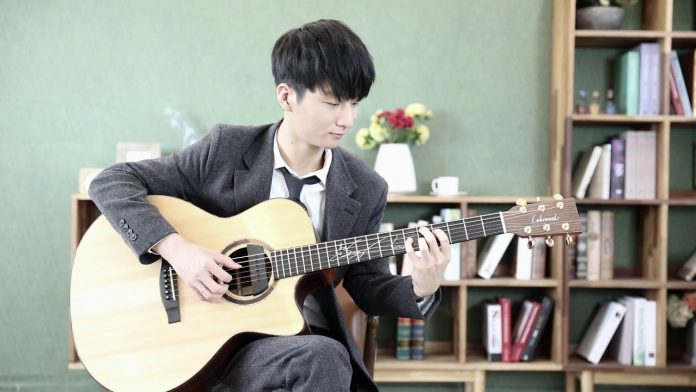 Sungha Jung is an acoustic fingerstyle guitarist from South Korea who performs acoustic guitar cover songs and original music on YouTube and other social media channels.

Sungha is a guitar-playing prodigy, having mastered his instrument at such a young age he has grown an admiring following around the world for his talents. His YouTube channel has grown to over 6.4 million subscribers. Since opening his channel back in 2006, Sungha has racked up over 1.8 BILLION views across all of his videos! The video below is one of his most viewed to date.

His father taught him the basics and helped him to get started with playing the guitar. Sungha quickly began reproducing songs just by listening to them, and if he got stuck, he would use the internet to study instructional videos. It wasn’t long before he was playing complex melodies, such as in the video below where he covers the Titanic theme song.

Sungha was influenced heavily by his musical idol “Kotaro Oshio”. Kotaro is an acoustic guitarist from Japan. Born in Suita, Osaka, on February 1, 1968, he is best known for his work on the steel-string guitar. Sungha studied Kotaro’s fingerstyle playing and continued to master the technique.

Although Sangha’s father was very impressed with his boy’s progress, when Sangha first started playing, his grandmother and mother were not pleased with the noise that he and his father would continuously make in the house. It wasn’t long before both his parents and grandparents understood that Sungha had a gift which they nurtured and supported incredibly well.

In the video above, Sungha is only 10 years old. Sungha’s talents, hard work, and ability have landed him with a strong musical following online and a brilliant musical career offline.