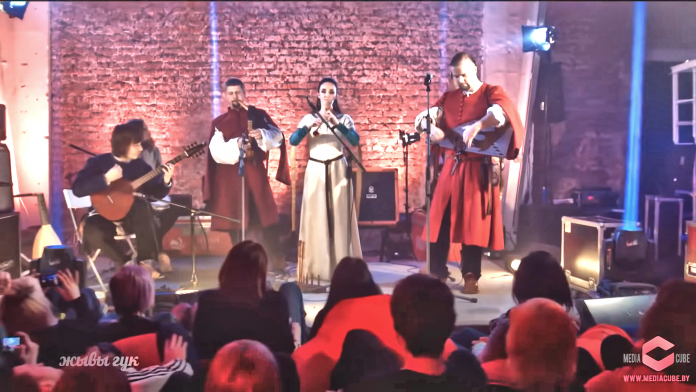 This is an awesome band called Stary Olsa who perform modern music using instruments from medieval times. Their performances are not just unique from a novelty standpoint, they produce really enjoyable cover versions of popular songs.

The Belarusian band is known as “Стары Ольса” in their home country. They play medieval Ruthenian music of the Grand Duchy of Lithuania where Belarus was the main cultural and geopolitical part in the 13th – 18th centuries. The band has been building a name for themselves online after adapting well-known songs into medieval-style cover songs. A great example of their awesome arrangement skills is this cover of Red Hot Chilli Peppers “Californication”.

Their popularity has expanded outside of Belarus, something not many bands from the country have been able to achieve. The band boasts a wealth of positive critical reviews of their live performances. This, along with their ability to harness the opportunities available to musicians online is providing them with a very strong platform for growth.

Mixing modern songs with medieval instruments and costumes, whilst using the internet to show the world their unique musical skills, has proven to be a perfect recipe for success.

The band was founded by “Źmicier Sasnoŭski” in 1999. The band was named “Stary Olsa”, which translates into “Old Olsa” a brook in the west part of Mahilioŭ Region of Belarus. The band now consists of six musicians in total who perform regular theatre concerts and music/cultural festivals.

Stary Olsa is restoring the love for old instruments that are under constant threat of being completely forgotten. Instruments such as the Belarusian bagpipe, svirel (reed pipe), jew’s-harp (aka the jaw harp), Belarusian trumpet, birch bark trumpet, and the tromba marina (a triangular bowed string instrument). Their music keeps these instruments alive.

To add to the cultural mix of instruments, some members perform with European medieval instruments such as a lute, rebec, cister, flute, Arabic drum.