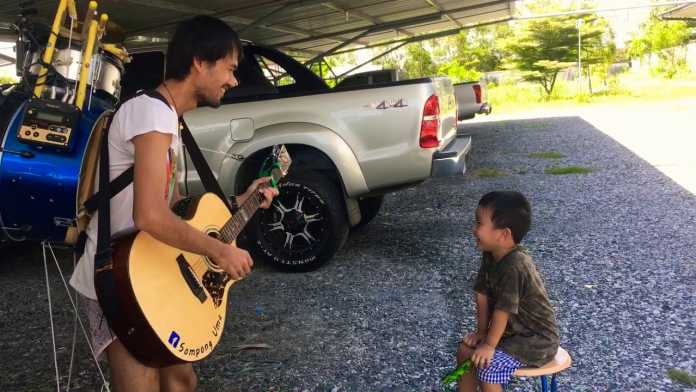 Sompong Uma is a very creative retro style one-man-band from Thailand who is becoming a popular music maestro in his home country. Celebrities such as Zakir Hussain (an Indian tabla virtuoso, composer, percussionist amongst other things) and industrialist Anand Mahindra have been urging people to listen to Sompongs music and take notice!

We have featured many one-man-bands including the fantastic Anders Flanderz who has a similar style of retro one-man-band/strap all the instruments to your body. With notable celebrities spreading the word about Sompong’s incredible talents he is starting to get the air time he deserves. The Music Man thought he should follow suit – because he is pretty impressive after all!

Another celebrity to hail Sompong’s talents was an Indian film actor, director, screenwriter, playback singer, producer, and television host – Farhan Akhtar. He didn’t actually know who Sompong was, but he was inspired after watching a video of him playing and had to share.

This is the tweet that Farhan Akhtar published, “@FarOutAkhtar
What a star.. no idea who he is or where he’s at but he sure deserves a RT. #musiclove #makehimfamous #onemanband”

The next tweet was from Anand Mahindra stating he wanted to award Sompong for his talents, but he wasn’t sure which talents. We’re not sure if he ever found Sompong or ever gave him that award. If you’re reading this @anandmahindra did you ever award this man?

@anandmahindra
The friend who posted this wasn’t sure where this rather resourceful one-man-band was from. He suspects somewhere in the NorthEast. Does anyone know him? I’d like to give him an award for innovation or musical talent—haven’t quite decided which one yet!

Sompong Uma is from Phanat Nikhom district in the northern region of Chonburi Province of eastern Thailand. Singing in Thai he has done extremely well to capture the attention of people who don’t speak the same tongue. Talent really does shine through and music is a universal language for us all.

He has a very popular YouTube channel which he started in 2011 and has received over 19 million views since he opened the account.

If you want to see more from this brilliant one-man-band, he has a large list of videos on his YouTube Channel.