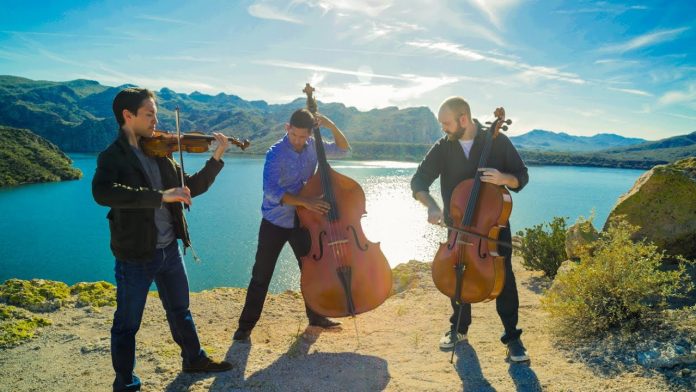 Simply Three are a trio consisting of a Bass Cello, Cello, and Violin. The three people behind the instruments are Glen McDaniel, Nick Villalobos, and Zack Clark. All three graduated from Arizona State University with a Bachelor’s Degree in Music Performance. They use their instrument in innovative ways to create viral music videos.

The trio record cinematic music videos of their performances in cities or picturesque locations. They have been captivating audiences all over the world since they first started performing together back in 2010. They were dubbed as “having what it takes” by the Boston Philharmonic Orchestra, a professional orchestra based in Boston, Massachusetts. The video below of the trio performing an instrumental cover of “Wake Me Up” by Avicii has seen over 62 million views since it was uploaded in 2014.

They are classically trained musicians who have a real talent for mixing genres and musical tastes. Their classical training has allowed them to explore multiple different styles of music including pop covers which have been a major driving force in their popularity on social media.

Not just a cover band, the trio have created their own original works which have been well received by their fan base. One of their own original songs called “Rain” is their second most-watched video on YouTube (to date) with over 41 million views! Simple Three loves to cross classical music with pop influences and the results are wonderful to listen to. The video below is a cover of Adele’s Rolling In The Deep.

The group are technically gifted, hardworking, and passionate musicians, which is probably what the Boston philharmonic meant when they said they have what it takes. Their music has appeared in major publications such as The Huffington Post and Rolling Stone. They have also received major accolades from mainstream musicians on their personal social media accounts.

They say that they have “old school training but a new school sound”, which is the signature sound for their musical works. Their unique approach to creating music has gained attention from famous musicians and other celebrities including Kellindo Parker (Janelle Monáe), Alyson Stoner, and Jeff Smith (M-Pact). Below is another cover, this time of “Take Me To Church”, originally released by Hozier.