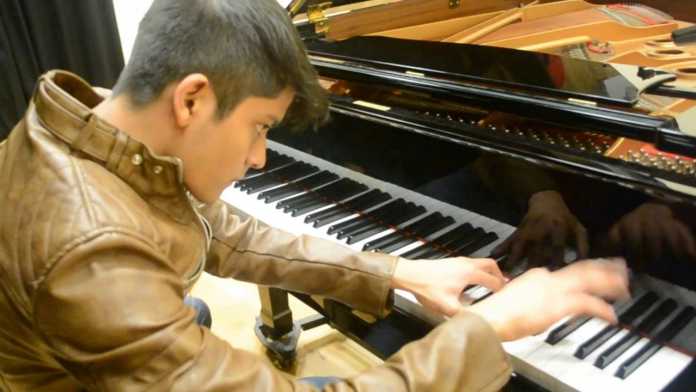 This is a very talented musician from Mauritius called Rahul Suntah. He records and produces his own music, arranges his awesome cover songs, and of course is an amazingly talented pianist.

Rahul was born in June 1997. He started playing the piano at just the age of 8 and quickly became popular online recording piano cover songs. After many more years of hard work, practice, and viral videos, he has grown a very popular YouTube channel and Instagram. Watching the videos below it’s not hard to see why so many people support and follow his wonderful work!

Rahul is a classically trained musician which means he learned to play by the theory, standards, and style of classical music. In his videos, he mixes these classical roots with modern technology and music to create visually interesting video content which is also quite musically exceptional.

He studied ABRSM piano and music theory at the Frederic Chopin Conservatory of Music in Mauritius. The ABRSM is a well-known examination board and charity registered in London, UK. They provide examinations in music at varies centres across the world with the resulting qualification being number graded (EG. Grade 8).

Rahul went on to study Audio & Music Technology in the UK at the University of the West of England in Bristol where his main focus was music composition, production, and sound engineering. Playing on Elton John’s St. Pancreas Train station Piano Rahul plays a brilliant version of Decpacito.

Using technologies such as Ableton Live (A music production software) and a Novation launchpad, Rahul can perform in a large range of musical genres. With a long list of musical studies, dedication, passion, and talent, Rahul is starting to create a name for himself.

If you want to see more videos from this awesome pianist follow his socials!