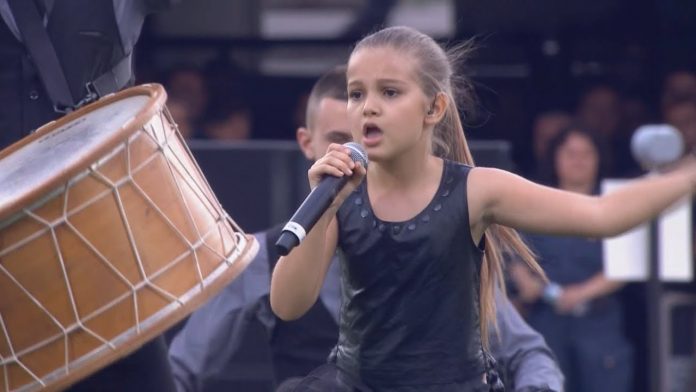 Polly Ivanova is a singer and musician from Bulgaria. For such a young girl, you would never expect such heartfelt and passionate performances as she has shown in the past few years.


Scroll down to watch more of Polly’s videos. Ivanova first hit our screens when she appeared on “Bulgaria’s Got Talent” in which, at the age of eight, she gave a beautifully angelic rendition of “Listen” by Beyoncé. This performance wowed the judges and the audience, leaving them awestruck at the talent of the young singer. Ivanova went on to perform a stomping version of Queen’s “We Will Rock You” at a huge “All-Stars” football match. Thousands of football fans watched on as Ivanova, preceded by a band of drummers, strode out into the middle of the pitch to perform the Queen anthem, and what a performance it was. The crowd watched on in amazement as this tiny performer held the attention of thousands, with her powerful vocals and showmanship.

You may think that this was the highlight of Ivanova’s short career, but you would be mistaken. Since that initial performance on “Bulgaria’s Got Talent” she has gone on to produce some truly inspiring covers of popular songs, through the use of her YouTube channel. Over the years since her first performance, Ivanova has gone from strength to strength with regards to her vocal talent and her instrumental mastery. In all of her videos on YouTube, the young star is either playing guitar or piano, with a skill that most aspiring musicians can only dream about.

In 2019, Ivanova posted her cover of the hugely popular song “Shallow” originally sung by Bradley Cooper and Lady Gaga in “A Star Is Born.” In the video, it shows the 12-year-old fingerpicking her beloved acoustic guitar with impressive dexterity and skill. As the song progresses Ivanova’s youthful voice gives an uplifting tone to the somewhat melancholic piece, whilst maintaining the style and pitch-perfect tone you would expect from a professional recording artist.

Ivanova’s absolute passion shows through in every one of her performances.

In her videos, it is clear to see that she really feels the music she is performing, ensuring that every note is hit, every moment of the songs she covers is nurtured and cared for as if it was her own written piece. She is most certainly one to watch.