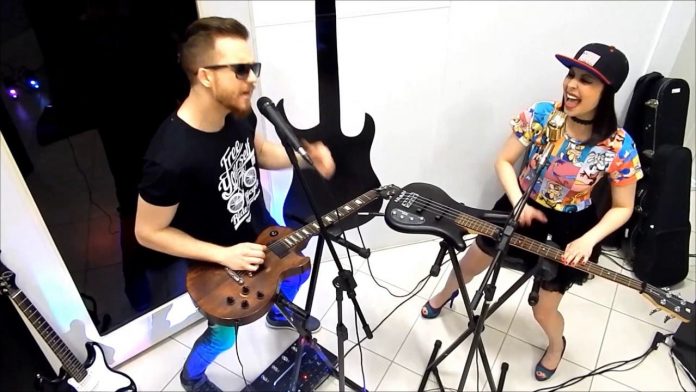 Overdriver are a talented music duo that produces popular cover songs. The duo consists of Evandro Carlos Tiburski and Fabi Terada, both musicians from Brazil.

Overdriver are well-known for their viral music videos across multiple social networks. To date, they have over 3.2 BILLION views across all platforms! In the video underneath, they perform Dire Straits’ “Sultans Of Swing” using their ukuleles. The soft sound of the ukulele suits this rock song beautifully.

Overdriver Duo are known as a global phenomenon in the viral music scene. Since gaining considerable popularity by uploading covers of themselves performing popular songs using ukulele’s, singing, and playing various other instruments, the duo have begun touring their talents around the world.

They have been recognised as one of the most viewed viral music groups of this century. Building a loyal following and continuing to create great content showcasing their talent. In the below video, they cover Sweet Child O’ Mine by Guns ‘n’ Roses. In this video, Fabi Terada sings and Evandro performs the awesome Slash solo on his ukulele!

Evandro is also a director and music producer as well as a musician, his skills are vital to the production of their viral video works. Fabi started playing the bass guitar before moving on to learn other instruments including the drums and the ukulele. They opened their YouTube channel on the 21st of October 2014.

To date (14/10/2020), they have gained more than 134 million views across all of their amazing videos. You can see in the video below the duo perform AC/DC’s “Thunderstruck” using Ukuleles.