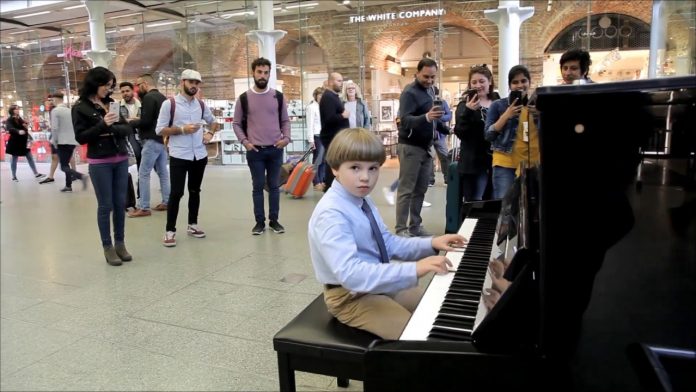 “OLIVIER” is a young musician from the UK who has a string of viral videos on YouTube. His most viewed videos have been of him playing on public pianos in train stations around London.

One of his most viewed videos on YouTube was captured during a performance using a public piano in London’s Underground Station. At just 9 years old, “OLIVIER” sat down on a public piano dressed to impress wearing a stylish suit, tie, and a bowl cut. He began playing a couple of notes before exploding into some super impressive boogie-woogie.

This isn’t OLIVIER’s first public performance. At just 8 years old he played alongside the well-known pianist “Brendan Kavanagh” at St. Pancras station. Brendan actually sat OLIVIER down and taught him some of the boogie-woogie he is so proficient at today.

The youngster’s skills are so impressive, every time he has sat down at a public piano he seems to gather a large crowd and create a new viral video.

Since his lesson from one of the masters of boggie-woogie, OLIVIER has really taken on the genre like a natural. He has even come across another boogie-woogie legend called “Terry Miles” who joined in with one of his public piano performances.

Terry jumps in to provide the melody lines while OLIVIER takes care of the rhythm and bounce that Brendan taught him. The public piano/boogie-woogie music scene in London looks to be raising a child star right in front of our eyes.

OLIVIER opened his YouTube channel in 2017 and has reached over 11 million views since then. He is a natural talent with what looks like a real genuine passion for playing his musical instrument. There is no reason why this young man can’t make a brilliant future for himself. If you want to see more from this piano-playing prodigy subscribe to his YouTube channel.