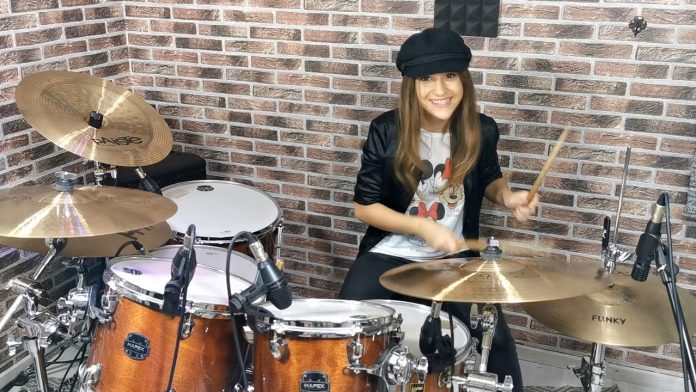 Here is Nikoleta ‘Drummer’ Šurinová, a super talented drummer who comes from Trnava, Slovakia. Nikoleta was born on the 22nd of March 2007 in Trnava, Slovakia and she currently lives in a small village near where she was born called Špačince.

Nikoleta began her musical journey when she was just 9 years old. During the summer of 2016, she took an interest in playing the drums after her mother, Monika, arranged a surprise performance for Nikoleta’s father, Roman. Roman used to be an avid drummer when he was younger, as a surprise present for Monika and Roman’s 20 year anniversary, Monika spoke to the band DESMOD and arranged for Roman to perform alongside them. In the below video, the 13-year-old drummer plays a powerful and energetic cover of “Asturias”.

After seeing her father playing on stage Nikoleta became fascinated with the drums and began following in her father’s footsteps.

When her parents saw how interested she was in the drums, they bought a drum kit for her to learn on…and the rest is history. In the underneath video, she rocks the drum part to Metallica’s “Master Of Puppets”.

Since learning how to play, she has performed in many large venues. She also performed Vivaldi’s work “Winter”, arranged by The Piano Guys, a group of famous American musicians, who ended up sharing Nikoleta’s cover version of their official Facebook page. Nikoleta created her YouTube channel on the 7th of September 2016. Since then, she has gained over 5.9 million views across all her videos.

In the underneath video, Nikoleta is playing “Seven Nation Army” in Frankfurt, Germany. The video has had nearly 3 million views on YouTube alone!