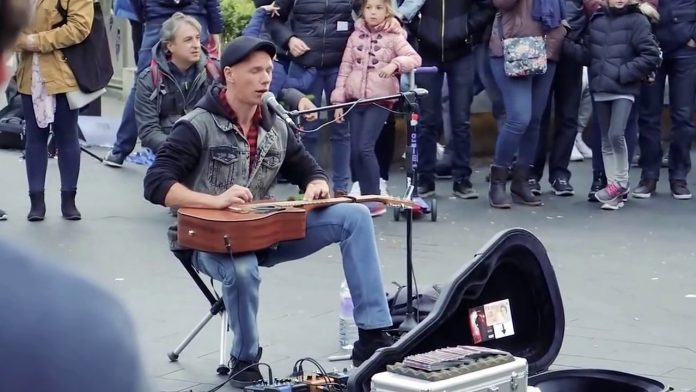 The Guitar might not have been designed for Morf’s preferred style of play, but this young man has changed all of that.

Brilliant improvisation by using his guitar as a drum is great to watch. Not only that, he has a great voice, he comes out with all sorts of different sounds to create his own unique ‘take’ on every song he sings.

He’s also a master ‘Beatboxer’. At present he’s located in London but originally he is from Australia. While busking in city centres, sometimes the crowd swells to over a thousand, making for a great atmosphere.

He is often seen Busking around London gathering huge crowds and has quite a following. He connects closely to all watching and creates a real emotional bond.

‘Morf’ has quite a following. He’s been viewed by over 100 million people watching online or ‘live’. His creative use of the guitar really gets the crowds involved, and become spellbound watching him perform. He has in fact been featured on ‘Good Morning America’ and lots more. He has many fans from most corners of the World. Hardly surprising as his unique talent has no boundaries when it come to entertainment.

He’s been featured on The Music Man’s Facebook page several times and always gets excellent interaction. Watch the video above to see just how talented this young man really is.

Kristen Mosca Ragtime Pianist With A Love For All Things Disney