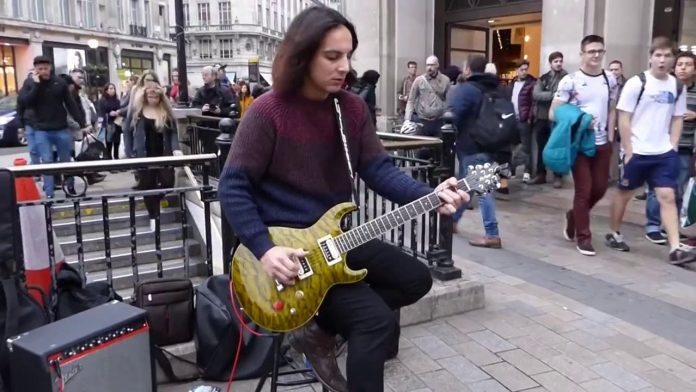 This is Miguel Montalban, an excellent guitarist who comes from Santiago, Chile. Miguel is also a composer and songwriter and has been dubbed “One of the greatest young guitarists around”.

Miguel is best known for his brilliant guitar solos. He has a YouTube channel with over 60,000 subscribers and multiple viral videos. In the video below, Miguel plays the lead to one of the greatest rock songs ever “Bohemian Rhapsody” by Queen. This video showcases his great talents, played live on the streets.

He launched two albums back in 2015 called Inspirations Vol1 and Vol2. The releases were very successful selling over 20,000 copies in the first few years! Miguel is a representative of London’s “International Busking Day” and has received great accolades from brilliant musicians such as Mark Knopfler who said, “This guy is totally Excellent… he has that “Sultan’s ear” and uses his talent to be an even better Dire Solder… “.

Miguel has not only been recognised by other brilliant musicians in the industry, but by massive international brands too. He has been sponsored by Gibson Guitars, Carlino Guitars in the USA, Olympus Custom Guitars in Australia, and Grover Allman in Australia exclusively achieving the production of his own prototype signature custom guitar. In the below video, he covers the Pink Floyd classic “Wish you Were Here” at Gibson’s showrooms. The video was sponsored by the guitar manufacturing giant to help showcase their brand.

After receiving brilliant comments from industry professionals, and having some of the largest brands in the industry trying to align themselves with his talents, Miguel has continued to build a successful music career playing the electric guitar. I’m sure we will see much more from this talented musician in the future. He opened his YouTube channel on the 6th of August 2013. Since then, he has amassed over 14 million views across all of his incredible videos.

In the below video, he plays another cover song on the streets this time of Cocaine by JJ Cale.