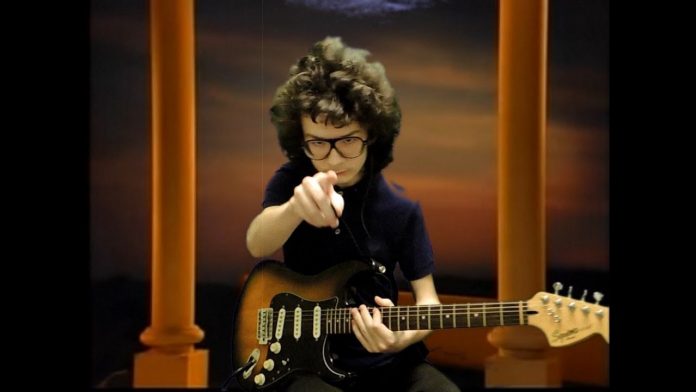 This is a very skillful guitarist called Max Ostro from Russia. He uploads videos of himself playing the guitar to his YouTube channel, although “playing” is an understatement.

Born June 9th, 2004, Max’s real name is “Макс Остро” and he is only 12 – 16 years old in some of the videos below. His videos have been taking off on YouTube as people start to notice the genius talent this young man has. In the video below he swaps between acoustic guitar and electric guitar multiple times changing up the sound and his playing style. The passion and feeling he manages to project using the guitar is exceptional.

Max has been making a stir on guitar forums across the web. Fellow guitarists are admiring his ability to play such difficult peices / riffs at such a young age. Their conversations are in turn helping to spread the talents of this gifted young Russian guitarist.

His deadpan facial expression throughout his performances, with the odd glance at the camera while he casually plays extremely advanced solos, makes for great entertainment…and a little bit of jealously amongst the guitarist community.

Max is simply an incredible guitarist without any doubt. He opened his YouTube channel in 2016 and began uploading videos of himself playing the electric guitar.

He has now accumulated over 3 million views across all of his videos and I’m sure there will be many more views in the next few years. He is a sensational musician and I seriously recommend you check out more of his videos especially if you’re an avid guitar fan yourself.