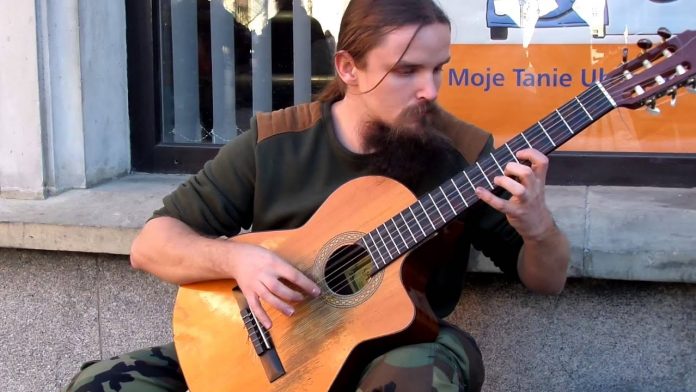 There are some fantastic buskers across the world and Poland’s Mariusz Goli is up there with the best. Whether you’re watching him on the street, or in a video, his incredibly entertaining super-fast guitar playing style is a pleasure to watch.

Mariusz was born in Poznan, a city on the Warta River in western Poland, but can be seen performing in many European cities. Not only does he love performing to crowds on the streets, but he also earns his living as a street busker. He loves improvising playing different styles including genres such as flamenco and folk music.

Mariusz has been playing professionally as a guitarist since he was 15 years old. He started learning when he was just 7, constantly playing, improving, and dedicated to his craft.

He loves to be in contact with his audience while he is playing, which is why he prefers to play on the streets rather than in concert settings. Although the street is his favourite place to play, he can also be seen in restaurants and bars entertaining people during their evening meal.

Being a very spontaneous artist, he mainly plays improvised pieces. Incorporating his Polish creativity with classical acoustic music and Flemish styles he is always developing new was he can play his instrument.

In 2016 he released his first CD “Road Into The Unknown”. The next CD he recorded and released was called “Orchestra In My Mind” it was released in 2019.

Not just a street musician, Mariusz has become an endorser for Ortega guitars – a well-know guitar brand. In 2018 he composed music for the movie “On the Run” which was directed by Beata Dzianowicz. Most recently in 2020, he was asked to compose the music for a next-generation VR game called “The Wizards – Dark Times”.