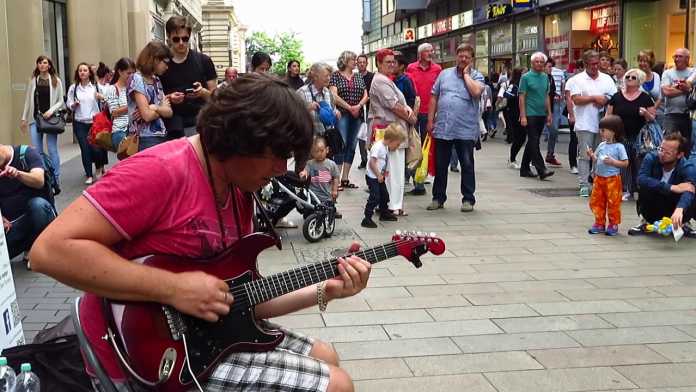 This is Marcello Calabrese; a very talented Italian guitarist who performs as a busker on the streets of Italy. Not just a busker, Marcello performs professionally at events and festivals.

Marcello’s passion for music is clear to see during every single performance, whether it’s on the streets or at a gig, he is exceptional! The video below is one of Marcello’s most popular performances. Filmed by a passer-by on the streets of Rome, Piazza Navona, it has gone viral gaining over 13 million views since it was uploaded in 2012.

Marcello comes from Caltanissetta, a comune in the central interior of Sicily. Hard work and bags of natural talent have allowed Marcello to beautifully masters his electric guitar in such an effortless way whilst offering his audience a passionate musical experience.

Marcello comes from a musical family and has been playing the electric guitar for many years. His brilliant style has attracted a lot of attention over the years. Since opening his YouTube channel in March 2009 he has received over 2.2 million views across all his videos! He specialises in 70’s rock music and you can see him below playing his wonderful rendition of ‘Comfortably Numb’ by Pink Floyd.