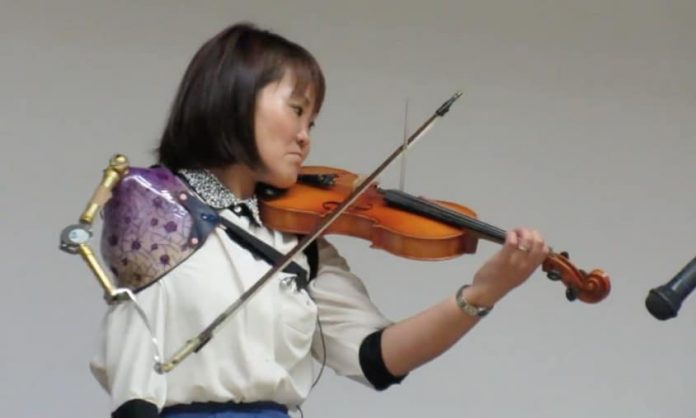 It’s not every day you come across someone as inspirational as this lady. Manami Ito from Japan is a wonderful violinist despite her handicaps.

The multi-talented Japanese musician is also a nurse and a Paralympian swimmer. Her swimming style is breaststroke for which she came 4th in the 2008 Beijing Paralympics. She also competed in the London 2012 Paralympics, coming 8th in the same event.

In 2004, Manami lost her arm in a traffic accident involving a large truck when she was just 20 years old. Losing an arm is devastating for anyone at any age, however, she feared she would never be able to play her violin again. Thanks to a custom made prosthetic arm she is able to continue playing the instrument that she loves.

After many hours of practice, drawing inspiration from sportspeople who use prosthetics to achieve amazing things, Manami was well on the road to being back to her musical best.

In the video above she was recorded performing a song called “Thread” by Japanese singer-songwriter and radio personality, Miyuki Nakajima. The video was recorded in September 2018 at the Takarazuka City General Welfare Center in Hyōgo Prefecture, Japan.

Manami appeared on James Corden’s reality talent competition series called “The World’s Best” where she did a live performance with her violin. She had all the judges in tears throughout her emotion-packed performance. You can watch the video of her audition below.

She said on the program, “I lost all hope, I left school and didn’t leave the house for a year. Something that really stuck with me was, my mother said, ‘Please play the violin again for me someday.’ I’m very excited for people to listen to me.”

After her performance, James Corden dubbed her as “the miracle violinist”. Manami is also reported to be the first nurse in Japan who has a prosthetic arm.