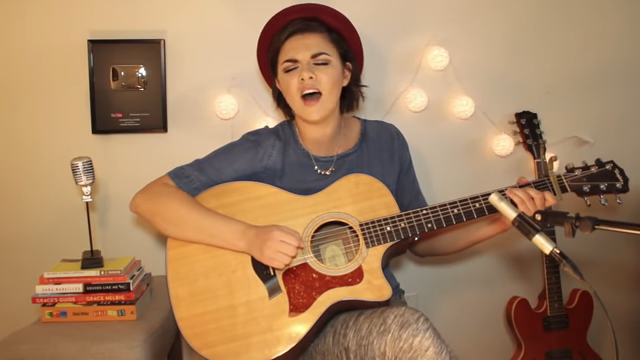 Mackenzie Johnson is a YouTube musician from Pennsylvania, USA. She is best known for her viral covers of pop songs such as Ed Sheeran’s “Thinking Out Loud” and “Shallow” from the film A Star Is Born.

Born January 26, 1993, Mackenzie began teaching herself to play the guitar at the age of 15. Seeing the potential in not only herself but in utilising the internet to grow a platform for her music, she opened her YouTube channel in October 2010. Below is a video of Mackenzie covering “Shallow” from the 2018 hit film A Star Is Born.

The video above is her most viewed YouTube uploaded to date. Her wonderful vocals, excellently delicate guitar playing style and delivery have all resulted in her channel reaching “Stardom” level in the community – not to mention her stylish choice of hat wear. Mackenzie was inspired by Kina Grannis, an American singer-songwriter, after she watched a video she uploaded to YouTube. The concept of watching videos online was still relatively new at the time and Mackenzie found it bazaar but intriguing at the same time.

Mackenzie continues to grow her YouTube channel with regular uploads of new content. However, she isn’t just a brilliant cover artist, Mackenzie writes her own material alongside her cover releases. Honing her songwriting craft is something Mackenzie is passionate about and her YouTube channel has become a great outlet for her original material.

At the start of 2016, Mackenzie was in contact with songwriter, publisher and music producer, Frank Rogers. After working together for a relatively short period of time, later that year she signed a record deal with Fluid Music Revolution, Frank’s joint venture with Spirit Music Nashville.

When asked what is your most successful song to date Mackenzie didn’t choose the most viewed video on her YouTube channel but one of her own songs called “Pretty”. She said, that maybe other videos have gained more views but the interest and connection her original music has granted her with her fan base is more of a success to her.