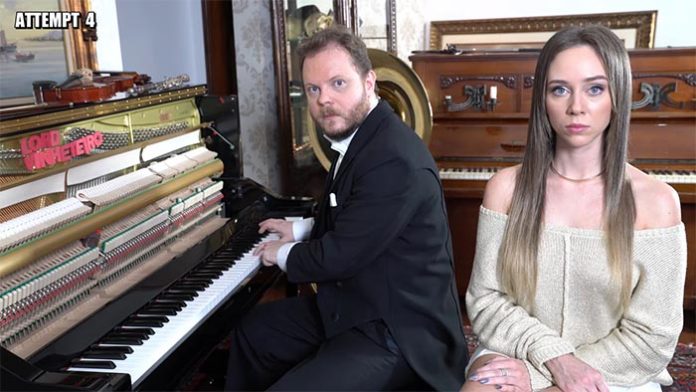 Fabricio Andre Bernard Di Paolo is the man behind the YouTube account Vinheteiro. He is also known as “Lord Vinheteiro” due to his unearthly talent for playing the piano.

Vinheteiro was born on January 22, 1980, in São Paulo, Brazil. He opened a YouTube account in 2008 where he began uploading videos of himself playing the piano covers…with a twist. His first ever video upload was a cover of The Simpsons theme song, which he casually played as the videographer, presumably one of his friends, grabs his ear. He went on to become known as Lord Vinheteiro after a string of viral videos including the video below of “Top 10 Most Difficult Piano Pieces”.

Vinheteiro showcases his personality not only during the recordings of his videos but in the types of videos he makes. He could just record piano covers to an exceptionally high standard, however, he chooses to be unique by creating piano performances with a twist.

His videos all have a caption such as “10 movie songs on the piano” or “How to make a girl smile”. Not only does he casually perform some of the hardest piano songs ever written, he sometimes stares into the camera lens while he’s doing it. He began learning how to play the piano at the age of 8. At first, his main focus was studying piano and violin for which he had private lessons. Along with his piano playing ability, Vinheteiro is also a music producer.

His skill and personality have landed him a loyal following on YouTube pretty much since the moment he opened his account and upload a video of him playing The Simpsons theme song. Vinheteiro studied at veterinarian college and graduated with a degree, but his love for music and playing the piano has always taken priority for him, which is why he has never practiced as a vet.

Vinheteiro takes the position of the most-watched and most-followed pianist on YouTube with over 6.1 million subscribers and 701 million views across all of his piano videos.

The Brazilian pianist has taken his skills to another level by opening “, his own piano tutoring course.