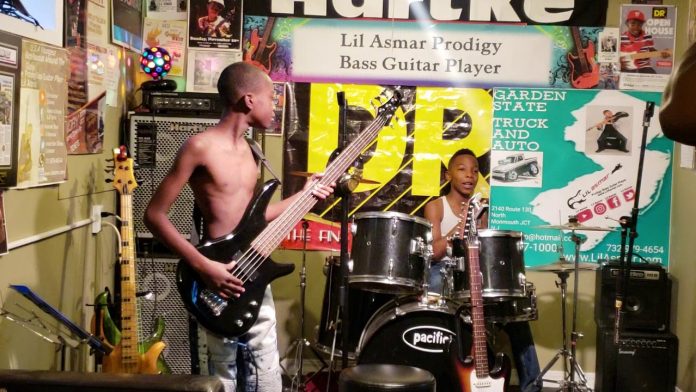 This is Lil Asmar and his cousin Joshua Grant, two musical prodigies from the USA and the same family. Lil Asmar is a bass guitar prodigy and Joshua is a drumming sensation!

In the video below, the cousins are playing an original song “Lil Asmar Detroit”. They have both appeared on national television shows showcasing their incredible musical talents. Both the prodigies have their own YouTube channels where they regularly upload videos, the boys are just 11 years old in the video below.

Lil Asmar appeared on Little Big Shots hosted by Steve Harvey where he played in front of a live studio audience who were super impressed with his talents. Steve Harvey said after his performance, “You a bad boy”.

Lil Asmar fell in love with the bass guitar and has since developed into a fantastic player at such a young age. Following in his fathers footsteps and making the most from his natural gifts, Lil Asmar has been reported on local and national news stations.

Joshua Grant was born on the 30th of September 2007, he is years ahead of his age group in terms of drumming technique and abilities. His style, rhythm, and passion for the instrument he plays is clear to see in all of his performances.

Joshua opened a YouTube channel back in 2016 and in just 4 years he has racked up over 9 million views across all of his videos. He regularly updates his YouTube channel with fresh drumming content, check the links at the bottom of this article to watch more.

Both these young lads have an extremely bright future ahead of them, I’m sure we will be seeing much more from them in the future.