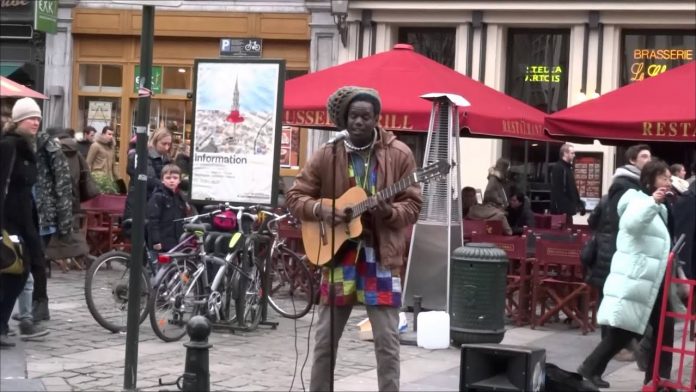 Lampa Faly is an extraordinary talent from Senegal. He busks regularly on the streets of Belgium attracting large crowds with his wonderful vocals. Lampa is a reggae artist with bags of natural talent.

In the video below Lama Faly was performing outside Grand Place in Brussels. He attracted a large crowd by singing well known Bob Marley covers. The vibe he created with the audience was unique and very special that day. A bystander called Dasha Pearl, who happened to be from 2014’s ‘France’s Got Talent’, joined Lampa and sang using his mic while he played the guitar. During ‘France’s Got Talent’ TV show, Dasha impressed the judges with her great vocals which are powerful, controlled, and rich. Check out the video below to see what happened.

Lampa’s vocal tone is similar to Bob Marley which is why he covers many of Bob’s songs and does each of them justice. Not only does he bring the sound that Bob would have wanted, but he also spreads the message that Bob preached. Peace, love, and unity through a joint love of music.

Grand Place in Brussels is actually considered to be one of the most beautiful places to visit, especially if Lampa is providing live music on the day you go!

His performances always get the crowd singing and dancing along to his infectious vibe. The happiness and enjoyment is clear to see on everyones face during his street busking sessions.

The wonderful videos above of Lampa performing in Brussels were captured by a Korean tourist named Jaeseok Kim who was part of the captivated audience that day. The videos have since gone viral bring uploaded and covered by multiple news outlets around the world!