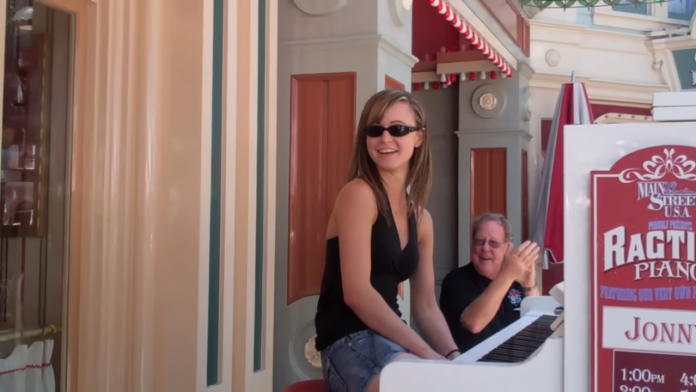 Kristen Mosca is a multi-talented musician from the USA with a love for all things Disney. She has a special passion for ragtime piano and music in general.

Ragtime (rag-time) is a style of music that peaked in popularity between 1895 and 1919. Ragtime’s distinctive “ragged” rhythm is it’s most distinguishable trait. Kirsten has played several instruments over the years including the clarinet, the flute, and the bassoon. However, she states on her YouTube about page, that the piano has always been her number one love.

Kristen started playing the piano at the young age of 14. She studied music at UNLV (The University of Nevada, Las Vegas), where she got a degree playing the flute.

Even though she graduated playing the flute, Kristen’s love for the piano has prevailed in her musical life. She started a YouTube channel in 2006 where she uploaded a video of herself playing a public piano at Disneyland. The video quickly went viral.

Kristen was first inspired to play ragtime music by a pianist called Johnny Hodges. While Kristen and her family were on a trip to Disneyland, Johnny Hodges was the resident pianist at Coke Corner. Kristen’s mum spoke with Jonny and explained that her 15-year-old daughter (at the time), loved to play and that she was learning a new song. Jonny seized the opportunity to get Kristen up and playing.

Kristen said, “Being a nervous and shy kid, of course I refused, but she went up to him, told him my life story and then he insisted that I play Maple Leaf Rag, which I only had about half memorized at the time. Naturally, the kid in me got nervous, forgot what I was doing, and quit – but Johnny picked up the piece where I left off and finished it out for me. This was an inspiring interaction – he seemed so happy to be doing what he loved – you could see it on his face! I never forgot that face.”

It only took one moment for Kristen to fall in love with the piano and this particular genre of music. Since then she has become a wonderful pianist, taking her talents and running with them. She uploads lots of Disney cover songs to her YouTube channel including the video above -“Friend Like Me – Aladdin”