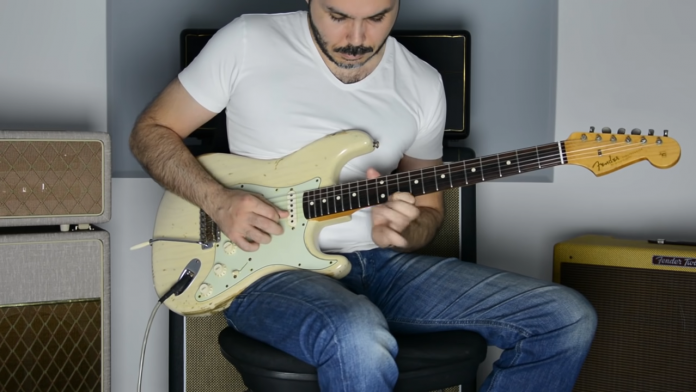 Here is Kfir Ochaion, an awesome electric guitarist from Israel. Kfir has multiple viral videos where he plays the lead vocal to a song using his electric guitar. He has a great playing technique and his guitar sounds awesome!

Kfir has spent a lot of time learning his instrument and perfecting the technique and sound which it outputs. The tone of his guitar is perfect for playing/replacing lead vocals, which is probably one reason why his videos have been so well received. Kfir started his YouTube channel on the 18th of September 2006. Since he began uploading videos, he has got over 194 million views across all his videos.

Kafir was born on the 29th of July 1980 in Israel. During his musical career, some of his covers on YouTube have gone mega-viral having been watched by millions of people around the world. “My Heart Will Go On” is a cover song that Kfir recorded which did particularly well.

His YouTube channel has gained more than 1 million followers since he started uploading videos back in 2006. You will see in the video underneath he covers the well-known pop song Despacito by Luis Fonsi, Daddy Yankee ft. Justin Bieber. He makes it his own awesome rock version!

Kfir makes brilliant electric guitar cover versions of popular songs. He uploads his videos to YouTube where he has grown a following of adoring fans. In the video below, Kfir covers Alan Walker’s “Faded” using his electric guitar.

In the video below, Kfir covers the classic “November Rain” by Guns ‘n’ Roses. This song is so well suited for the guitar and definitely suited to Kfir’s playing style. This video has over 5 million views on YouTube alone.