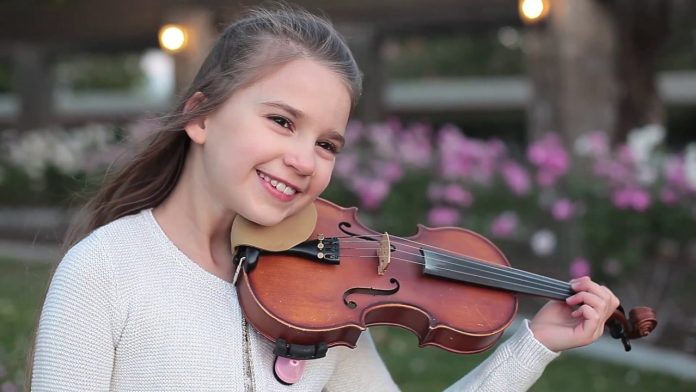 Karolina Protsenko was born in Ukraine to parents Nikalay and Ella on October 3rd, 2008. She moved to the United States with her family when she was only 6 years old in 2015. Karolina was born into a musical family with both her mother and father playing the guitar.

Karolina started out learning to play the violin in 2014 but didn’t start busking until 2017. She really enjoys her public performances and is often recorded by members of the public, whose videos end up on YouTube and Facebook. Her passion for performing is quite clear when you watch her play and is one of the main reasons she has gained many adoring fans across the world.

Her favorite busking location is Santa Monica, 3rd Street Promenade, which she repeatedly returns to with her instrument to serenade the crowds. For such a young woman to already have mastered her instrument to such a high standard, it’s exciting to watch where her career will take her in the future.

In the video above, Karolina plays a cover of Imagine Dragos’ ‘Believer’ alongside saxophone sensation Daniel Vitale. This is one of the many pop songs she covers. After her massive success following multiple viral busking videos, Karolina Protsenko appeared on The Ellen Show in 2019. She performed a cover of “Sunflower” by Post Malone which was very well received by the studio audience. After her performance, she had a brief interview with Ellen and also received a gift from the TV show host.

Ellen provided Karolina with a custom blue violin with commemorative “As Seen on Ellen” stickers, along with a busking bucket tip jar for the next time she took to the streets to perform. Karolina expressed she was saving up for a puppy and busking was a great way to raise money to achieve that. Before the end of the show, Ellen dropped a “reasonably” large quantity of cash into Karolina’s new busking tip bucket…maybe she can now afford that puppy!

You can watch Karolina’s performance on The Ellen Show in the video below.

With a fan base of several million people located across the world, Karolina has gained huge support for her busking videos. She has been classically trained and has said she learns pop songs “very quickly”, some within one hour. Have a look at some of her most viewed videos below.

Featured in September, her Ed Sheeran cover got over 16,000 views! Ed Sheeran’s ‘Perfect’ has become a modern day classic, being played in every country around the world. Karolina recreates the emotion of the song, using only her violin.

If you want to see more from Karolina check out her Facebook page. and follow her work for more brilliant busking videos!

Did you enjoy watching Karolina? You’ll probably love The Trouble Notes! They’re an awesome band with a violinist as the lead instrument. After travelling and busking around the world, they’re now growing into a formidable musical show worth every second of your attention. Click here to check them out!