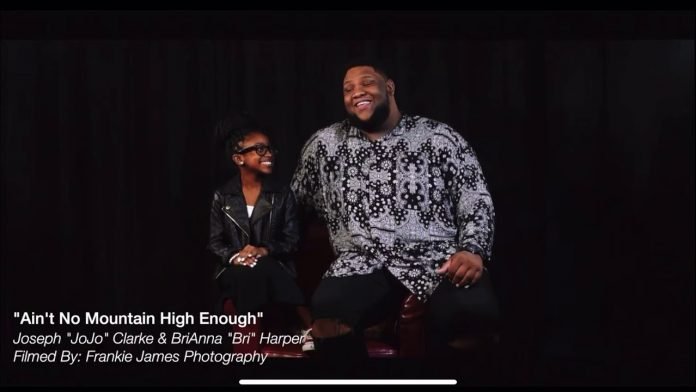 Every now and again a quality singer shows up on a stage or in a viral video. Joseph ‘JoJo’ Clarke has done just that. After recording a video with his niece Bri’Anna Harper singing ‘Ain’t No Moutain High Enough’, the soul singers received a lot of attention on social media.

Joseph is from Richmond, the capital of Virginia and one of the oldest cities in America. He is involved with many local choirs in the area including a baptist church and Virginia Commonwealth University’s Black Awakening Choir. He’s also a vocal coach and the tenor singer of the popular 3 piece singing group “Resound”.

With a background in musical theatre, Joseph says his influences are from artists such as Whitney Houson, J.moss, Luther Vandross, Mary Mary, Smokie Norful, CeCe Winans, Daryl Coley, Andrea Bocelli and Steve Wonder. Definitely not a bad list of people to be influenced by.

Being an accomplished vocal arranger and producer, Joseph has recorded and released his own original music which you can find on his social media pages. We’ve provided links at the bottom of this article if you want to check his work out.

Joseph is also a member of singing group “Resound” who have become an Instagram and YouTube sensation. “Resound” are a 3 piece vocal band from Richmond looking to touch lives with the music they create. The group have also provided backing vocals for a number of notable artists including Tye Tribbet, Johnathan Nelson, Byron Cage, Kurt Carr, Vernon Gordon, and many more.

If you want to see more from Joseph JoJo Clarke check out his Facebook Page or his Instagram and follow him for updates on his latest work.