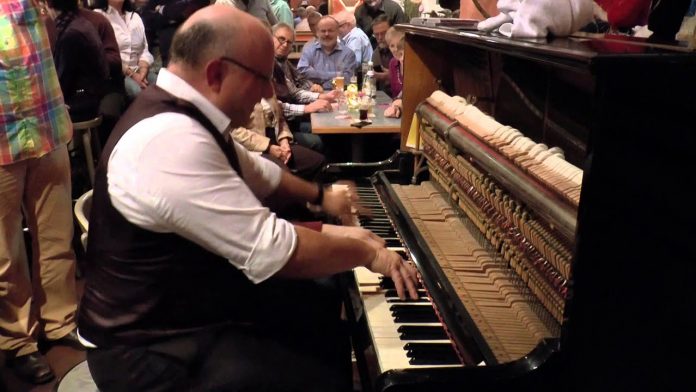 What happens when two brilliant pianists meet and there is only one piano? A boogie-woogie battle of course! The two men playing in the video below are called Jörg Hegemann (left) and Stefan Ulbricht (right).

This video has captured a very special moment. It’s not often you get two brilliant and notable musicians show up to entertain the crowd. Both musicians have caught the “boogie and blues virus” during their careers and completely mastered the classic genre.

Jörg Hegemann was born in 1966. Inspired by boogie-woogie kings such as “Albert Ammons” and “Meade Luz Lewis” he has developed his skills so much it has allowed him to tour Europe, Russia and the USA for the past three decades! He was awarded the “German Boogie-Woogie Award Pinetop” in 2009.

The video below is Jorg playing some boogie-woogie as the orchestra watch on in disbelief! He certainly knows where the middle C is. This is one of the masters in action.

Stefan Ulbricht was born in February 1982 and started his musical passion at the young age of 5. He began his musical journey with guitar lessons before moving onto the piano when he was 14 years old. It wasn’t long before he found himself emersed in the boogie-woogie style and culture.

Below is a brilliant video of Stefan Ulbricht showing his boogie-woogie skills in a local pub.

As you can see both musicians are exceptionally talented pianists, which is why when they combined in the first video they created something very special.