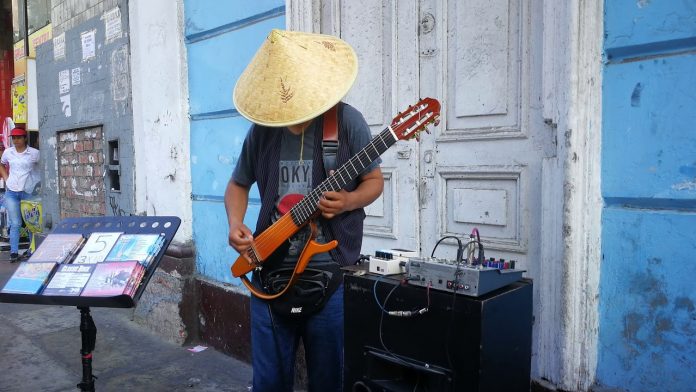 This is Joe Moraya a brilliant Peruvian electric guitarist who plays for tourists on the streets. His unique looking guitar and playing style is admired by many passers-by.

Lots of videos have been surfacing across the internet of Joe performing cover songs on the guitar such as Dire Straights, and The Good The Bad & The Ugly. A video that really has gained a lot of attention recently is the one below, which involves another musician, playing a saw.

We are not sure who Joe’s busking saw playing friend is, but we know we love the sound of it! The video has been shared across the world, with many people commenting regarding how unique and creative the saw instrument is.

His unique look also attracts people to his music. You can barely see his face in the videos due to the Asian conical hat he wears, but this special look makes him a brandable enigma.