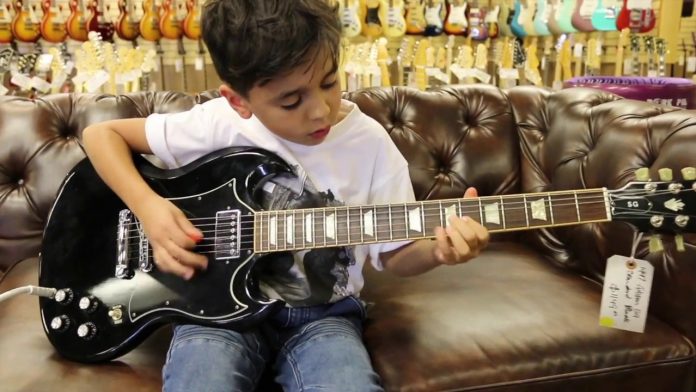 This is Eleven-year-old Jayden Tatasciore from Perth, Australia who started playing the guitar when he was just 5 years old.

He was inspired to take up the guitar after watching a documentary on the AC/DC guitarist Angus Young which he then watched every single day while listening intently to the music and would copy all his moves. His guitar became his life. He loves all things rock and roll including Guns and Roses, Slash, Jimi Hendrix and Metallica.

The video above is a brilliant performance of the classic solo from Sweet Child o’ Mine. Jayden is a big Guns ‘n’ Roses fan, so much so that he has learnt all of their most famous solos and plays them with such passion and enjoyment.

Guns and Roses were in fact so impressed by his rendition of their iconic ‘Nightrain’, they shared his video on their official social media channels. Although described as quite a shy individual at school, he becomes a completely confident musician when he gets his guitar in his hands!

He has performed at various charity events, regularly cameos in an AC/DC tribute band, and is a 2018 NAMM show artist. NAMM is a digital musical equipment show/fayre where some of the best artists in the world come to get a peek at the newest music equipment.

Jayden has even played in Andrew Lloyd Webber’s musical ‘School of Rock’ in Perth when he was just 9 years old. He played the character “Zach” and said he was “humbled and excited to be a part of the show”.

Jayden is one of the best young guitarists on the circuit today, his performance level is many years ahead of his age. Jayden’s videos have been posted to guitar forums by guitarists showing respect, and hints of jealousy, regarding this young man’s talents.

Jayden started his YouTube channel in 2015 and has already grown his following to over 7,000 subscribers and his Facebook page has grown to over 200k followers. He uploads new videos regularly.

Jayden wants to become a famous rock star one day and with his persistence and determination, we are sure to be seeing more of him over the years to come.