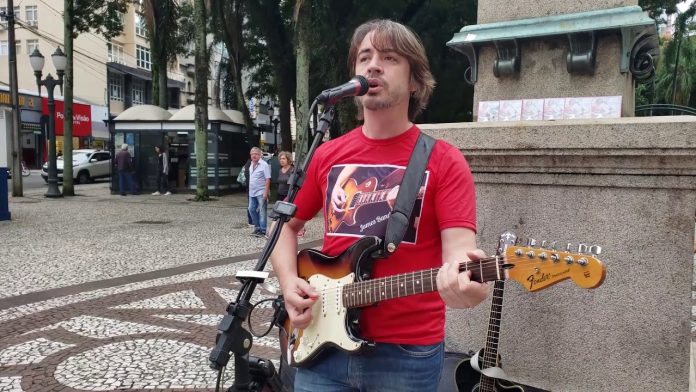 James Marçal is a musician from Brazil with brilliant entertainment skills! He is often seen busking on the streets of Curitiba, Brazil, entertaining tourists and the locals.

James is a “Músico de Rua”, which in English means “Street Artist”. After playing in pubs, nightclubs, restaurants, and festivals for over 20 years, he found performing to people on the streets provided him with a satisfaction no pub or restaurant could ever match.

James started his musical journey after his father gave him an acoustic guitar when he was 8 years old. He played this guitar for 7 years. When he reached 15 years old he bought his first electric guitar and fell in love with it. James then started his own band and played in other teenage bands as he continued to learn his craft.

For 20 years James was a working musician rather than a busker. He said, “From nights of putting my heart out and sharing my music I couldn’t help but feel a disappointment with the music.” His world changed the day he played on the streets for the first time!

James was finally finding enjoyment from his music, playing to people who were there to listen to his music and enjoy it themselves. He meets new locals and people from all over the world who love listening to him as they stroll by.

People have recorded videos of James performing and uploaded them to their social media accounts helping James to spread his music further than he ever imagined. Multiple videos on his YouTube have gone viral with millions of views.