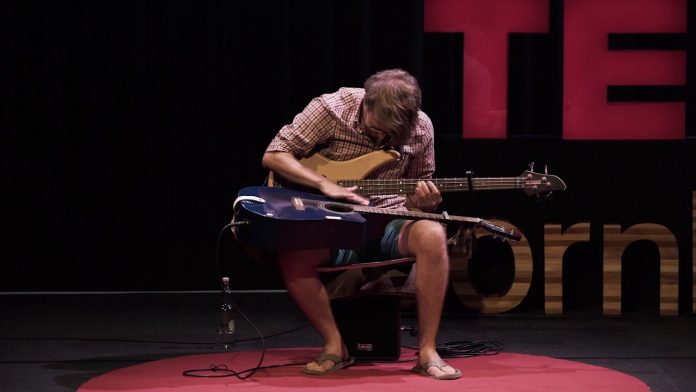 This is a very talented musician called James Chatfield. James is often seen busking on the streets of the UK performing with a bass guitar and a 6 string acoustic guitar, playing them at the same time!

The writer and musician says he finds peace and comfort during his performances on the streets. Providing a relaxing soundtrack to the streets is something he takes great pleasure in performing in any city or town he comes across. During the 2020 lockdowns, James has played where ever he can but has mainly been live streaming on Twitch and Facebook. Below you can see James performing with a bass guitar and acoustic guitar simultaneously.

James’ performances with two guitars simultaneously is his unique approach to a one-man-band setup. One of the hardest parts of playing as a solo acoustic guitar performer is creating a rolling and interesting bassline throughout each song. James’ set up allows him to perform as if he is a duo with a bassist alongside him.

His unique approach has certainly gained him some interest. When he takes to the streets to perform he gathers larger crowds and relishes these opportunities to play in front of a captivated audience. The performances are personal and intimate on the streets and the perfect setting for James’ calming style of music.

James documents his street performance journey on his blog (link at the bottom of this article). He has been playing on the streets for a number of years now, travelling throughout the UK spreading happiness through his talents. He says, “I’ve fallen in and out of love with it many times. In those low, dark moments, I go out and play, and it’s like a medicine… it cures my mind, I’m deeply grateful for this job and for everyone who supports it with donations along the way.”