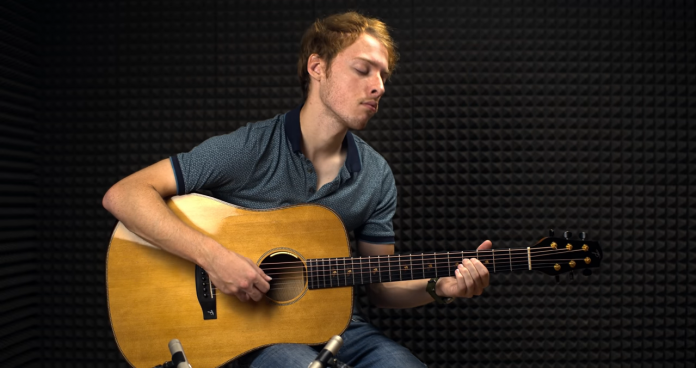 This is James Bartholomew, an excellent guitarist who comes from the United Kingdom. Fingerstyle guitar playing is when an artist plucks the strings with their fingertips or fingernails. This is opposed to playing or strumming chords. He is best known for his brilliant fingerstyle cover songs. He uploads his videos regularly to YouTube and other social media platforms.

This song, “Waiting”, can be found on Apple Music, Spotify, and other popular streaming services. With no vocals, “Waiting” nonetheless manages to capture the listener’s attention and keep it until the very end. It opens with a hauntingly beautiful tone and ends with a soft anti-climax at 3 minutes and 14 seconds. Yet, the ending doesn’t give the feeling of boredom. Instead, it quietly leaves the impression that the waiting has not come to an end. In the underneath video, James plays a beautiful cover version of Passenger’s 2012 super hit “Let Her Go”. James’s most recent single was released on April 13, 2020.

James can be seen playing a nice range of guitars in his videos. In his guitar arsenal, he has a Terry Pack DBS, Lowden Richard Thompson, Taylor Fall LTD 514ce-QS, Terry Pack SJRS, and a Brook Tamar Fan Fret. It is clear that he is thorough, knowledgeable, and passionate about his instrument of choice. Five guitars are featured on his website, and they are each given a breakdown of their musical style, their best uses, and the materials they are made of.

Interestingly, he has a Lowden Richard Thompson guitar that has wood coming from every continent except Antarctica. He has a Taylor Fall Ltd, of which rare limited editions are released each year. He also has a Brook Tamar Fan Fret that was made especially for him. Some guitars are described as good for recording, while others are apparently better for stage use. Regardless, it’s clear that Bartholomew respects the instrument in a way only a true artist could. He also has a very popular YouTube channel where he has grown a considerable following for his awesome fingerstyle guitar videos. In the underneath video, he covers a popular Maroon 5 song called “Payphone”. He takes the song and creates his own brilliant fingerstyle acoustic arrangement.

James is a truly gifted guitarist who shows passion, hard work, and determination to always keep improving. His videos get more mesmerising with every release. James created his YouTube channel on the 28th of December 2010. Since then, he has gained over 159,000,000 views across all of his amazing videos.

Aside from his original music, Bartholomew has played numerous covers. Some of these are available in video format on his website. A more extensive compilation can be found on Instagram and YouTube. Some videos are gathered into collections such as “5 Iconic Movie Themes”, or “5 Beautiful Film Songs”. Others are posted by themselves. The covers are an eclectic bunch, ranging from Queen’s “Bohemian Rhapsody”, to Nirvana’s “Heart Shaped Box”, to The Goo Goo Dolls’ “Iris”. You can even find “A Whole New World” from Aladdin. In the underneath video, he covers Yiruma – “River Flows” outside surrounded by gorgeous greenery, the scenery only eclipsed by his brilliant guitar playing.

Kristen Mosca Ragtime Pianist With A Love For All Things Disney