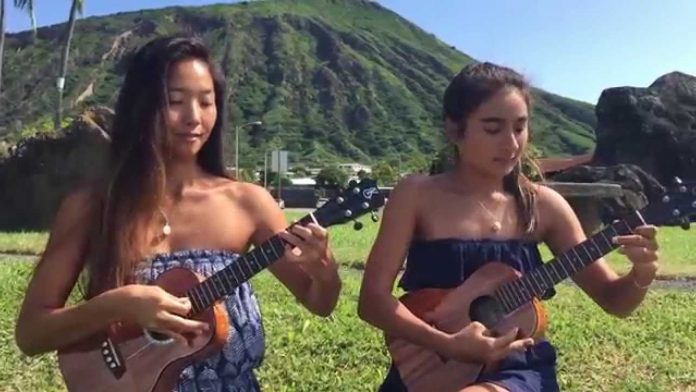 Honoka Katayama was born in 1998 and Azita Ganjali was born in the year 2000. They met in the Ukulele Hale studio in Honolulu which was founded in 2007 by Jody Kamisato. The two ukulele prodigies were students of Jody’s at the time. As the girls gained popularity, they continued working with their teacher who eventually became their manager.

Above is their most popular video on YouTube, as of September 2020, has gained over 22 million views! Their incredible skills, passionate attitudes, and breathtaking background scenery have grown them a considerable following across social media.

The duo have uploaded videos of popular cover songs and music they have written themselves. They opened their YouTube channel in 2013 and have since racked up over 38 million views across all of their videos.

Soon after they started performing together they entered a local competition called the “International Ukulele Contest”. Ukulele players of all nationalities, from the area, came to perform their instrument in front of a live audience. The girls came 1st in their division.

This kickstarted their career and it wasn’t long before they started taking their music seriously. With their first major performance under their belt, they began playing at popular festivals around the world and became regular performers at The Hard Rock Cafe in Honolulu.

In 2019, after 5 – 6 years of performing together, the duo uploaded a video explaining that Azita would be pursuing a career in medicine and Honoka will continue as a solo artist.

Their joint social media accounts are still online and so are the videos the dup uploaded, maybe one day the duo might team up again? Who knows but if you want to see the videos from Honoka & Azita’s time performing together subscribe to their YouTube channel.