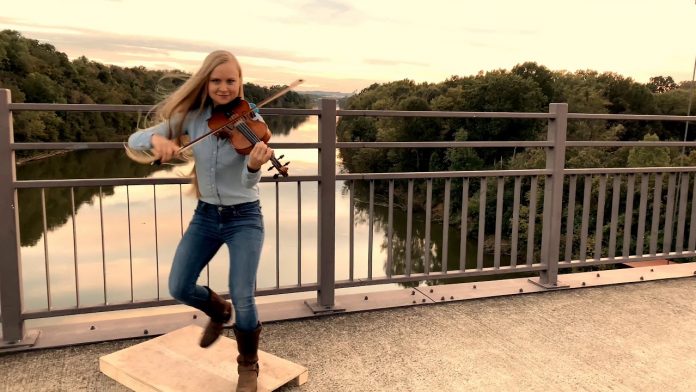 Hillary Klug is one of those musicians who makes her talents look super simple when really it’s almost humanly impossible. She is an exceptional buck dancer (aka tap dancing/clogging) and violinist. When she mixes the two together the results are extraordinary.

Hillary plays the violin whilst dancing on a wooden platform, using her feet for a beat and her violin for the melody, she creates extremely entertaining music. Hillary was born and raised in Fayetteville, Tennessee where she lived for 18 years and she lived in Lynchburg, Virginia for 7 years. She has now moved back to Nashville to busk and continue to pursue her music career.

Hillary started dancing at the age of 8 when she joined a clogging class which is where her artistic journey began. It wasn’t until she was 13 years old that she first picked up a fiddle (violin). Even though her family wasn’t particularly musical, her mum supported her with her musical ambitions helping her to buy her first violin.

She started attending group violin lessons which didn’t go as well as she would have liked, taking over 3 months to learn Twinkle Twinkle Little Star. Not wanting to let her mum or herself down by quitting, she explored other routes to continue learning her instrument. She met a fiddle teacher at a local contra dance who started to shape her musical style and ambitions.

After meeting her new fiddle teacher, Hillary started to mix with people from the old-time music scene in her area. She said, “Nobody in my family plays music or dances, and I had no idea that the world of old-time music and dance existed, but the more I learned, the more I was drawn to it. “

Hillary was now playing weekly square dances and also went on to become a National Buck Dancing Champion (“Buck Dancing” is also known as Clogging, a type of folk dance practiced in the United States). She was also Kentucky State Dance Champion.

Hillary is now touring, showcasing her incredible talents to the world via live shows, and building her online presence. She opened her YouTube channel in 2018 and has already amassed over 18 million views.

Italo Vegliante A Man of Many Noises