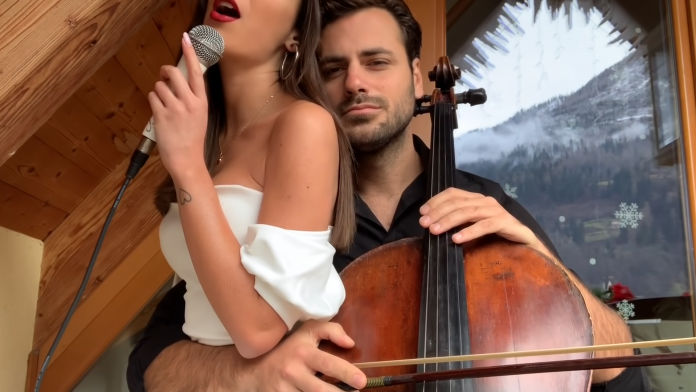 A Croatian cellist called Stjepan Hauser and Italian singer Benedetta Caretta have been lighting up social media with their awesome cover songs.

Hauser is a founding member of the band 2CELLOS where he and Luka Šulić perform well-known cover songs. The cello duo have been making viral videos together since 2011. Recently, Hauser has been teaming up with his Italian partner, Benedetta Caretta, who in the performance below is wrapped in her partner’s arms as she sings.

Although you can’t see Benedetta’s face in the video above, the couple went viral on YouTube with this compelling cover of Whitney Houston’s “I Will Always Love You”.

The video achieved over 6 million views and the couple have caught the attention of fans around the world who admire both their music and their relationship. Hauser was born on the 15th of June 1986 and opened his YouTube channel in 2009. His channel is packed full of viral videos and has received over 1 billion views in total. In the video below they perform Celine Dion’s “My Heart Will Go On”, and Benedetta’s face is still out of shot…is it poor camera work? Or maybe it’s intentional?

During the coronavirus pandemic lockdowns across Europe, the couple were part of a wave of musicians aiming to inspire with their music. They recorded a video through the internet in a “split-screen” format. Once again they found themselves touching hearts and being watched by millions.

This time you can see both musician’s faces as they covered “I Will Always Love You” once again by Mariah Carey. Their cover songs are loved by many who hope they continue to work together producing these wonderful videos.