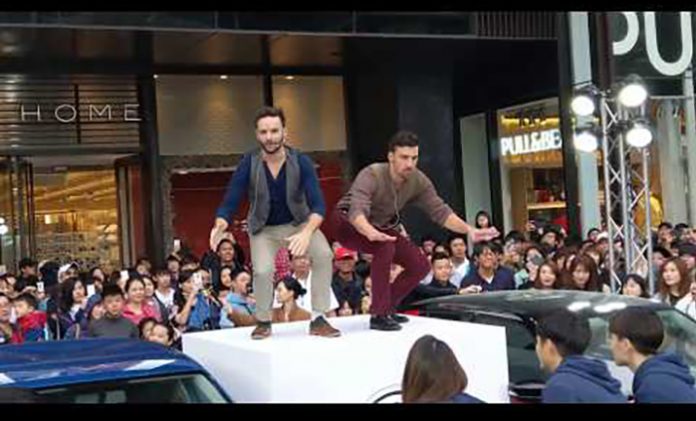 James Manzello and Matt Pavich are better known as the comedy duo behind the comedy YouTube Channel “Handsome Dancer.” On their channel they write, shoot and perform some truly comedic renditions of their own songs. In 2015 they hit gold with their flyaway hit “Handsome Dancer.”

The song features Manzello voicing a funny tale of two men who love to dance. Their wild tale takes them across the world, dancing as they go until one day, they meet on a train platform in Amsterdam. From there they go on to dancing the world to rights, eventually ceasing all wars and bringing world peace!

Please SHARE this hilarious video with your friends and family.


The hilarious video shows Manzello and Pavich dancing their strange, yet amusing shoulder shimmy in various locations across Europe whilst the narrator appears sporadically throughout, dressed in a full tuxedo sporting a fabulous mustache in the reminiscent style of Queen lead singer Freddie Mercury. The video went viral and as of the time of this article being written, it has accrued a truly staggering 13 million views.

The duo reached even higher fame when their song was used for a worldwide phenomenon that took the internet by storm, through the video app Tik Tok. The song was sampled, and users of the app can be seen miming and dancing along to the song on their own, in pairs or groups. The trend became massive and raised Handsome Dancers profile exponentially as a result.

The pair have devised some highly entertaining songs, which they also act in and direct the music videos for. Their style is somewhat reflective of “Weird Al,” in their mocking of modern issues and stereotypes. Handsome Dancer has recently released a new video in November 2020 of their new song “Pop Career.”

The song is a quizzical look at the modern-day pop star’s attitude to their success, as well as a view on how the pop industry has been affected by the recent developments with Covid-19. The video starts with Manzello on a mock social media live broadcast, as he reads through the comments, and spots a viewer make a comment insulting his status as a “Pop Star.” The video moves on to jump between a dimly lit room, and a hilarious Electric Six styled dance sequence. The video is poignant and funny, poking fun at the highly sensitive and ever neurotic pop diva attitude. Check out the video if you want a laugh.