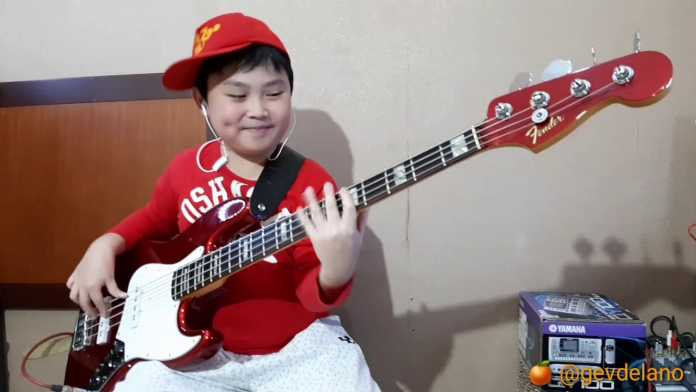 This is a young musician called Gev Delano from Indonesia. He has already mastered playing the bass guitar at only 10 years old.

Gev lives in Semarang, the capital and largest city of Central Java province in Indonesia. He started a YouTube channel back in 2013 where he uploaded videos of himself playing the drums. He was only 3 years old at the time, so maybe he had some help with the video and the internet side of things, but the music is all him! The video below is his most popular video on YouTube where Gev plays the catchy bassline to Dua Lipa’s “Don’t Start Now”.

His talent is clear to see and so is his passion. Gev makes all sorts of engaging facial expressions throughout all of his performances, showing he’s fully into the music he is playing and has a connection with his instrument.

This next video highlights his insane skill level even further. This time using a fretless bass guitar (with line markers) to recreate a song by Johann Sebastian Bach, a German composer, and musician of the Baroque period.

He captioned the video with, “Just for fun….” with a couple of smiling emojis afterward.

Gev first appeared playing the bass guitar in 2015 and it took him around 3 years of regular uploads to Instagram before he became an internet phenomenon. He is now approaching 50k followers on the network as of June 2020.

Gev seems to pick up on all the little nuances in the music, he hears every note flick and pop. His rhythmic articulation is on point which is the main rule of thumb when it comes to playing the bass guitar. “Never mess up the groove.”

Gev is clearly a very talented individual with a passion for playing the bass guitar. He continues to upload new content to YouTube regularly, videos you really don’t want to miss!

If you want to see more from this brilliant bass guitarist go subscribe to his YouTube channel and keep up-to-date with his latest work!