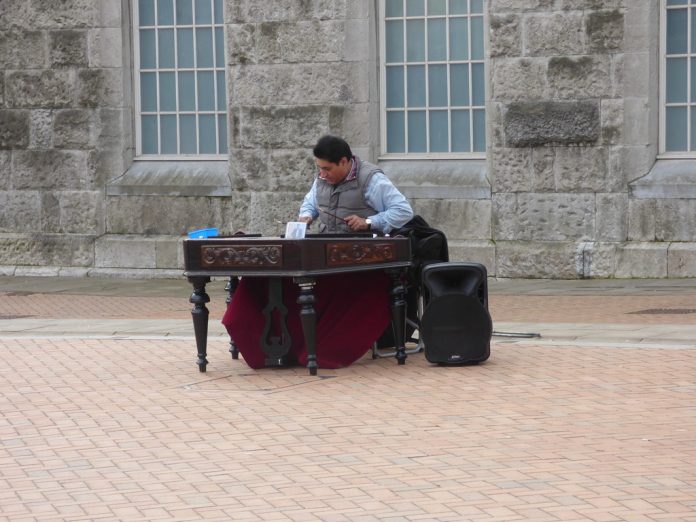 This talented musician is called George Balan from Bucharest, Romania. He plays a very interesting and rarely seen instrument called the cimbalom (Țambal in România).

He plays with musicians from Romania and on the streets as a busker. Being 100% self taught and having music in his family, he has developed a unique style and skill which people find highly entertaining to watch. He says that the cimbalom is his “Bread”, as he makes his money from busking and travelling to Slovenia to play on the streets.

George really is a great musician to listen and watch performing. You don’t often see people playing with a cibalom, especially in the streets. As this instrument isn’t seen that often, you may be thinking what is a cimbalom?

The Cimbalom, which is sometimes spelt as Cembalom, is a very large Hammered Dulcimer. It has foot pedals that vastly extend its musical range over simpler Dulcimers. It is played by a combination of hammering or hitting the strings and strumming across the strings with the back of the hammers used to play it. The instrument originated from Central and Eastern Europe, not India like many people think.

Though the cimbalom isn’t a common instrument, plenty of Cimbalom’s exist across the world. If you are travelling with one, you can dismantle the legs and pedal mount and fit it into your estate car. Explaining it at customs might be a little harder.

A brilliant talent and hopefully one day, if you’re walking one of the many streets which George plays, you will hear his wonderful music in real life.