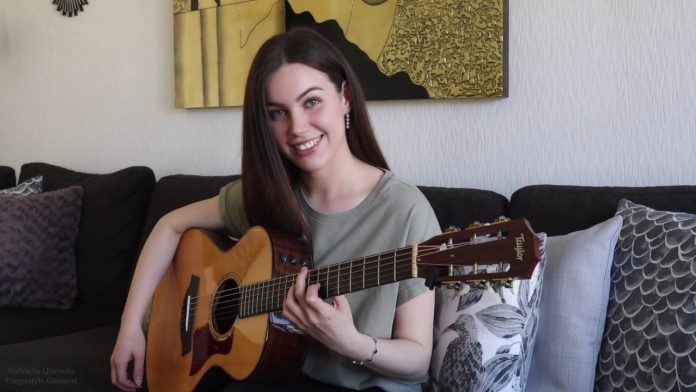 Gabriella Evelina Quevedo is a Swedish guitarist best known for her brilliant fingerstyle cover songs on YouTube. Her incredible style has gained attention from people across the world including large guitar manufacturing companies.

Gabriella was born on the 12th of January 1997 in Kinna, a locality in Västra Götaland County, Sweden. As a child, she became interested in playing the guitar after seeing her father playing the instrument. Gabriella grew up in Kinna, but her father is originally from Argentina and her mother is Argentine-Swedish. In addition to her wonderful musical talents, Gabrielle is multilingual speaking both English and Swedish, she also understands Spanish.

At 12 years old Gabrielle began playing the guitar, quickly taking an interest in the fingerpicking style. It wasn’t long before she had the style mastered, creating instrumentals using her guitar and performing complex fingerpicking cover songs. She initially started learning to play on her father’s Yamaha guitar, but after seeing the incredible talent Gabriella possessed, her parents bought her a “shiny black Yamaha with a cutaway”. You can see this guitar, which is also signed by fingerstyle guitarist Tommy Emmanuel, in some of her earlier YouTube videos. Now, Gabriella is supported by Taylor guitars and by G7th, a company that makes guitar capos.

She joined YouTube in 2009 and started uploading her cover videos to the platform. As of October 2020, she has received over 208 million views across all her videos! Her YouTube channel has over 1.3 million subscribers and she has started growing a fan base on Facebook too.

Her arrangements make the most out of the beautiful Taylor guitar she plays, creating bass, rhythms, and melodies using just one guitar. She released an album called “Acoustic Cover Songs Vol. 1” which contained acoustic instrumentals of popular songs, all performed using an acoustic guitar.

Gabriella also arranges her own original music. Her songs “Last Time” and “Remember” were released at the end of 2019. They were recorded at Mono Music studio in Stockholm, established by former ABBA member Benny Andersson. In the video below Gabriella plays a beautiful cover of The Beatles “Here comes the sun”.

Gabriella has been influenced by great fingerstyle guitarists such as Tommy Emmanuel, Sungha Jung, Kotaro Oshio and Andy McKee. She has included Andy McKee’s music in recordings and performance repertoires, she has also appeared in concerts with Andy in Sweden and on the international stage.