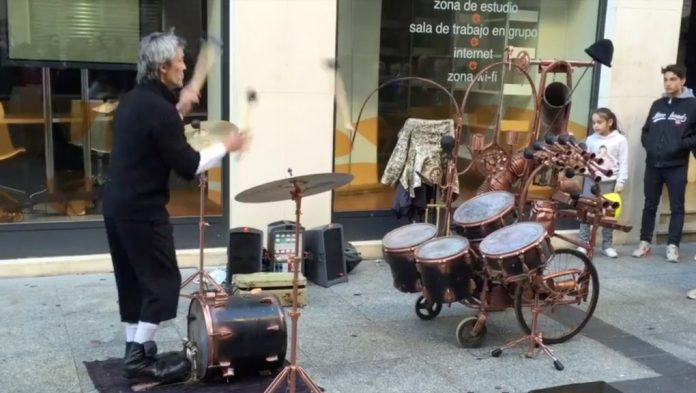 Funman Musicoloco is a street performer from Spain. Often seen busking around the city center of Zaragoza, the capital of northeastern Spain’s Aragon region. Funman has gone viral with a quite exceptional video.

The video below is of Funman Musicoloco performing what can only be explained as an incredible skill. He is throwing/juggling drums sticks, whilst keeping perfect timing to his backing music. Using his foot to play the kick drum, he throws the drums sticks, which hit the drums and then bounce back into his hands perfectly for him to then throw it again.

Funman is a graduate of Escuela de Circo Caramp, a circus school in Madrid, Spain, which goes a long way to explain how he acquired this awesome, and quite unusual set of skills.

When the video was first uploaded, it received over 15 million views in a matter of days. Now it’s been watched by millions around the world and continues increase it’s view count with the video being re uploaded across social media accounts.

Funman Musicoloco is also known as “Fran Fuman Cruz Cedeira” which is his real name. He has been playing the drums in this unusual way for a while now. There are quite a few videos of him online, performing his unique drumming style.

He is truly a one of a kind performer and the only drum stick juggling musician we known of! Having received numerous awards worldwide for his unique drumming style, Funman continues to perform to audiences around the world. His shows are getting bigger every year and his performance abilities in terms of crowd entertainment and engagement are the icing on the cake. He is a talented musician and a talented circus act rolled into one brilliant stage show.

Check out more from this brilliant act by subscribing to his YouTube channel.