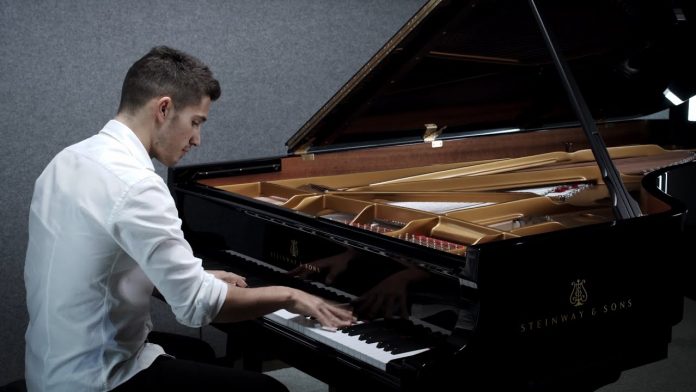 Francesco Parrino is a very gifted pianist and composer from Italy. He records piano cover songs and uploads the videos to YouTube (and other social media platforms) also providing sheet music for those wanting to learn the song themselves.

He creates his own musical arrangements by ear, twisting songs into completely new instrumental versions of the original. He started his musical journey by learning to play the piano at the age of 4. Francesco fell in love with playing the piano and has become a very passionate and well-rounded musician. His arrangements are transformational, in the video below he takes the melody from Queen’s “Bohemian Rhapsody” and performs it in his own unique cover version.

The video above has over 3 million views on YouTube and has been a massive part of Francesco’s social media growth. He also provides sheet music for all his cover songs and a tutorial on how to play the song. So if you’re a budding pianist interested in learning these covers, take a look at his video descriptions on YouTube.

Francesco spent a few years having formal classical training at his local music school. To help with his musical progress he also attended private lessons and spent many hours practicing to get to the level he is at today. Below is a cover of the 2018 super hit “Havana” by Camila Cabello.

His first album called “Night Planet” featured 10 of Francesco’s original compositions. This album was well received on his YouTube channel which he opened in 2011. Since then has amassed over 73 million views across all his videos!

Francesco is a pretty prolific musician in terms of content creation. To date, he has over 122 covers published on Spotify, 137 video tutorials (helping people learn the piano covers he performs), and 181 pieces of sheet music available for download.

Francesco performs his covers on YouTube and publishes the best performing songs onto his Spotify profile. If you like his covers you can listen to the audio versions on there.

Francesco is an awesome musician with an incredible passion and dedication to his craft. If you want to see more from this brilliant pianist, or learn any of his songs, head over to his YouTube channel and subscribe for more. You can also follow him on Facebook.