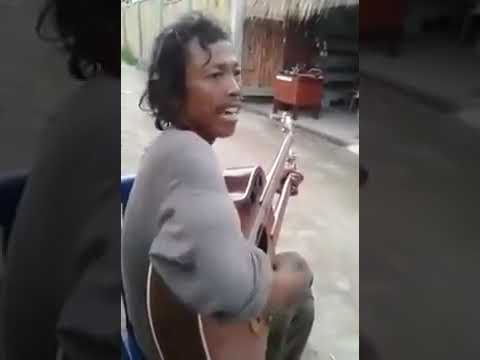 This is Eko, an Indonesian busker who decided to play a passionate cover of Pink Floyd’s classic ‘Wish You Were Here’ on the streets.

Released as part of Pink Floyd’s ninth studio album, also entitled “Wish You Were Here”, the song by the same name was written by Roger Waters and David Gilmour, David sang the lead vocals on the track. They released the album in 1975. The song has generated much discussion around the lyrics used and is often considered to be a tribute to Syd Barrett. During a documentary called “The Story of Wish You Were Here”, David Gilmour and Roger Waters described a different interpretation of what the lyrics were supposed to mean.

If anyone has any more information about the busker in the video above we know by the name of ‘Eko’, please tell us in the comments so we can add to this article. Below are some facts about Indonesian street busking.

In Indonesia, buskers are definitely not given the respect their music potentially deserves. They are known as ‘pengamen’, and are considered to be public nuisances for a variety of reasons.

In Jakarta, Indonesia’s capital city on the northwest coast of the island of Java, buskers are part of a miss-understood lower class who, along with transvestites, hitchhikers, and beggars are rounded up regularly in police raids and, in some cases, are required to go to social rehabilitation centers.

Buskers or “Pengamen” tend to perform around traffic lights, on public transport, outside shops, tourist hot spots, and markets. Their appearance varies, often negatively connotated as a disturbance of public order.

A well-known Indonesian busker said, “They want to sterilise the streets of the buskers. They will take everyone with musical instruments they find on the street. First, they will take us to the police station and if we don’t have ID cards they will send us to social rehab centres.”.