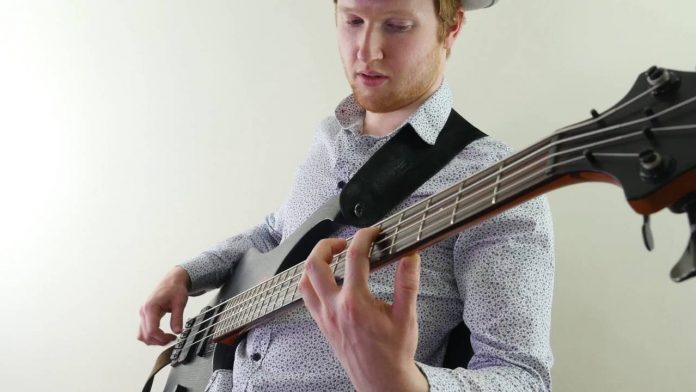 This is the British bass guitarist called Charles Berthoud (pronounced BEAR-too). He is gaining attention from music lovers around the world because of his unique approach to playing the bass guitar.

Charles is noted to be one of the masters of a bass guitar playing technique called the “Two-Handed Tapping” technique. This technique is similar to the “finger-tapping” technique guitarists such as Wagaal uses to create a bass and melody line simultaneously using only one instrument. You can see Charles’ wonderful technique in the video below.

The half Finnish and half British musician has been recording and uploading videos of himself to YouTube playing cover arrangements on the bass guitar since 2012. Since then he has accumulated over 21 million views on his awesome videos. He has covered songs such as “Mad World” by Tears for Fears/Gary Jules, all the way to to songs by legendary composers such as Beethoven.

Charles is a multi-talented instrumentalist and a classically trained musician. He can play the piano to a high standard as well as the bass guitar. He uses contemporary guitar techniques to play astonishingly fast, almost flamenco-like passages, such as the video below.

His musical versatility is very impressive. After years of hard work, dedication, and passion he has mastered his instrument and still continues to improve and redefine the standards for bass guitarists worldwide.

Charles has been inspired by bass players such as Flea of the Red Hot Chili Peppers, Victor Wooten, Jaco Pastorius, and, of course, James Jamerson – the uncredited bassist on most of the Motown Records hits in the 1960s and early 1970s.

Previously working as a baggage handler in London, Charles dreamt of moving to America to pursue his musical dreams. After accepting this was his only true path in life, he applied and was accepted into the prestigious “Berklee College of Music” in Boston where he studied with some of the best musicians in the world.

He graduated from the American college with first-class honors and co-authored an instructional book teaching the “Two-Handed Tapping” technique.

Not being defined by a single musical genre, Charles can be seen playing pop, rock, country, celtic, bluegrass, funk, and progressive folk. His talents truly transcend any one genre or playing style.