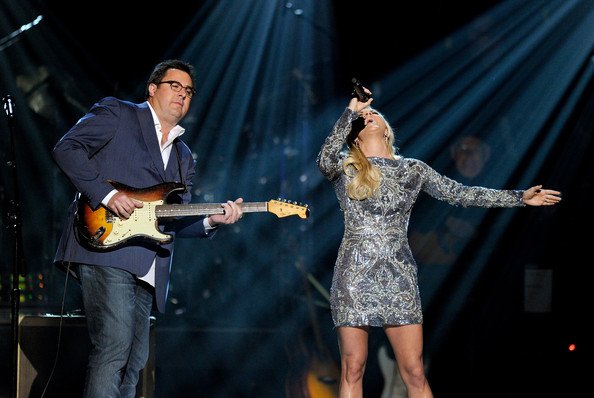 All music-lovers know how the right song can resonate with us and evoke an emotional response. This could be joy, sadness, hope, or despair. We might have tears in our eyes, or the hairs may rise on the back of our necks. Few genres can match the raw emotional power of country music, however. Make sure you don’t miss the last note, this has to be one of the greatest live performances ever filmed!

It is unsurprising that when you combine the silky, sultry voice of Carrie Underwood, a powerful harmony and flawless guitar solo by Vince Gill, and the beautiful hymn “How Great Though Art” you won’t have a dry eye in the house. It was certainly the case at ACM’s Girls’ Night Out: Superstar Women of Country special in 2011. Although the pair have dueted since this remains their best-loved and most enduring collaboration.

Please SHARE these two brilliant musicians with your friends and family.


Throughout the song the audience was so spellbound you could have heard a pin drop. It was obviously an emotional performance for the duet. The power and beauty of Carrie’s singing was mesmerising and so were the breathtaking harmonies created by Vince. Carrie was able to maintain the power of her singing right to the end due to a beautiful guitar solo played by Vince in the middle of the piece. By the end, the audience was on its feet and the cheering at the end of the performance was deafening.

Carrie Underwood rose to fame in 2005 when she won the fourth season of American Idol. Since then she has shown her star quality over and over again. She was the only country artist to enter the Billboard Hot 100 chart at number 1. She has sold over 70 million albums, won multiple awards and was described by Rolling Stone as “the female vocalist of her generation of any genre”.

Vince Gill began his journey to stardom with country rock band Pure Prairie League in 1979. Over the years he played with a number of bands and was even asked by Mark Knopffler to join Dire Straits. He struck out on his own in 1983 and has since produced albums that have won an impressive list of awards. He is also much sought after as a partner for duets.

This duet remains a standout piece for both artists in spite of their impressive resumes. A search of YouTube finds multiple postings of this duet. The top 5 alone, when combined, have been watched more than 12 million times. It’s beauty, power and the quality of the performance speaks for itself.