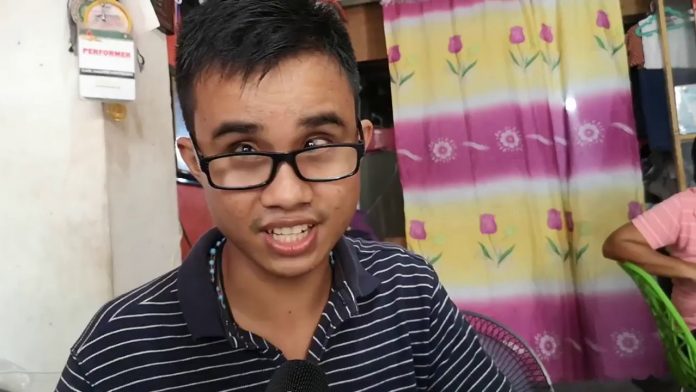 The ‘Blind Balladeer’ is a stage name for this fantastic young singer from the Philippians. His real name is ‘Carl Malone Montecido’. He is a blind Filipino singer with one of the most incredible singing voices we’ve ever heard.

After a video of Carl singing using Karaoke equipment in a shopping center in Bacolod City went viral, Carl has been invited to perform on some high profile TV shows. The vocalist performed a stunning cover version of Sam Smith’s “Too Good At Goodbyes”. His vocals have been gaining attention from millions of people online including some big names. Sam Smith tweeted on his official twitter account the video of the Filipino singer performing, which you can see below.

WHO IS THIS KID!!!!!? YOU ARE OUT OF THIS UNIVERSE WHOEVER YOU ARE ❤️ pic.twitter.com/4zHfaXVSw0

Kelly Clarkson is another big name that picked up on the talents of this young singer. She retweeted Sam Smiths’ post above giving much praise to the vocalist. Carl responded to the positive comments tweeted by Sam Smith saying, “To Sam Smith, thank you so much for your reaction I do appreciate that and I would like to say thank you also for giving me the inspiration to do or to work hard in my music career and I hope to see you soon and I wish we can duet”. We certainly would love to hear that duet too!

Below is another brilliant cover by the ‘Blind Balladeer’ singing over a backing track of Bruno Mars’ “When I Was Your Man”.

As with lots of other viral singers and performers, Carl has been invited to appear on The Ellen Show. A show hosted by Ellen Degeneres who has had a myriad of viral performers come on the show to perform and be interviewed in front of a live studio audience. Details regarding that performance are yet to be announced.

Carl first appeared on a TV show called “Tawag ng Tanghalan” an amateur singing competition currently aired as a segment of the noontime program “It’s Showtime” on ABS-CBN. He appeared in 2016 and got to the finals in season 1.

If you want to see more from this brilliant vocalist subscribe to his YouTube channel to keep up-to-date with his latest videos.