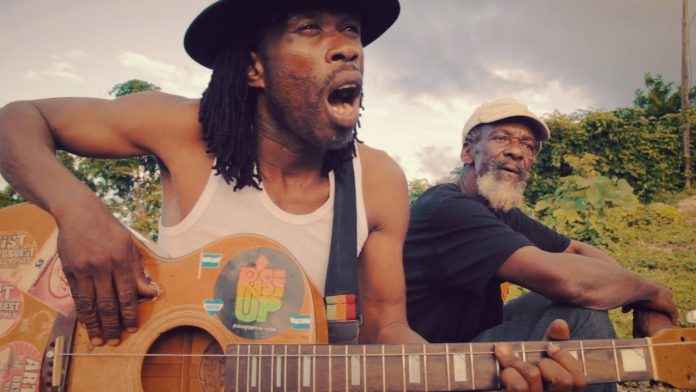 Andrew Chin a.k.a. Brushy One String was born in Jamaica as the son of the Jamaican Rock Steady legend Freddie McKay. Following in the big footsteps of his father, Brushy already had the urge to entertain people from an early age. He had massive success after he released a video of himself singing “Chicken in the Corn”.

When he was a child, he started playing the guitar and has played for audiences since then. However, Brushy did not just follow his father’s musical path but was able to establish his own unique musical style. His style can best be described as a mix of many different genres and shows a variety from blues to folk to rap to reggae and beyond – but there is even more to it: When listening to his songs it seems impossible, but as his artist name already suggests, Brushy is playing this interesting genre mix on a guitar with only one string!

Through rhythmic tapping on the body of his one-string guitar, combined with blues-inspired lyrics, he is able to create a full sound which suggests several people playing, not just one guy with a one-string guitar. There are several comments on Youtube with supporters wondering what would happen if you gave him a full set of strings instead of one. Nevertheless, his fans agree that this would probably be too much artistry to take in.

Click on the video to see Brushy One String perform “Chicken in the Corn” and get blown away by his artistry on a one-string guitar.

The first time Brushy One String was acknowledged by a bigger audience was through the 2007 documentary “Rise Up” by Luciano Blotta, which explored the Jamaican musical underground. The movie featured Brushy One String’s “Chicken in the Corn” on its soundtrack.

This song was so well embraced by the Youtube Community that RiseUp Entertainment decided to manage him, taking Brushy’s career to an international level. Since then Brushy has played at many major blues festivals like “South by Southwest”, released three different albums, and “Chicken in the Corn” has reached 44 million clicks on Youtube.

If you want to see more of Brushy One String you subscribe to his YouTube channel where you can find his latest videos. Find his upcoming tour dates by visiting his official website.